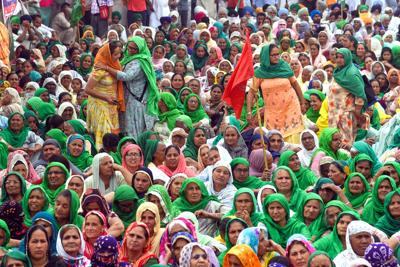 New Delhi: International Women’s Day has been marked by sit-ins and hunger strikes led by female farmers against the country’s new agricultural laws.

Nearly three-fourths of rural women in India who work full time work in farming, according to Oxfam India, making up a substantial share of India’s workforce. Local media reported that at least 40,000 women traveled to New Delhi this International Women’s Day to take part in the protests.

Throughout the country, women have played a leading role in the months-long protests. In Ghazipur, around 100 women wearing yellow scarves representing the colors of mustard fields participated in a sit-in, according to Reuters. At least 17 of them engaged in a hunger strike.

While Prime Minister Narendra Modi says the laws are an effort to modernize agriculture, for months now, they have been met with protests that gathered hundreds of thousands of farmers throughout the country. Farmers allege that the three new laws passed by the Indian Parliament in September would allow big companies to drive down crop prices.

In response to backlash, the Modi administration proposed an 18-month hold on the laws. Farmers, however, said they will not settle for anything less than a full repeal of such laws.

Indian farmers have been protesting at least since November. Agriculture makes up about 15% of the world’s fifth largest economy. It is also the primary source of livelihood for nearly 60% of the country’s population.

US tests push for sweeping change in Afghanistan as pullout...