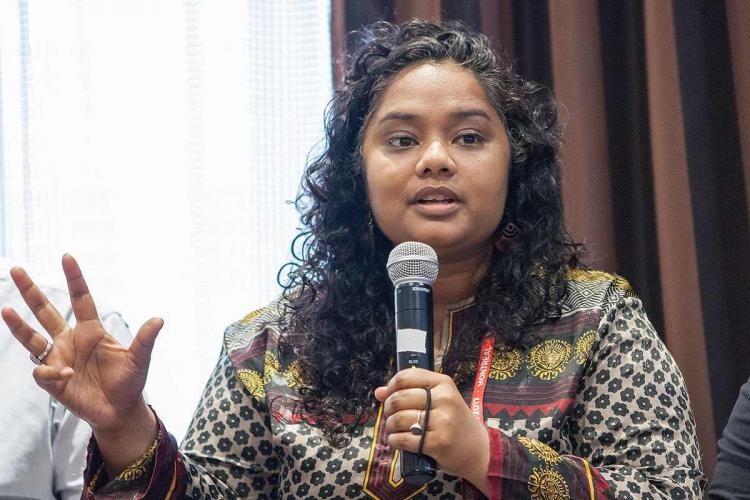 New York: A scheduled talk by US-based Dalit activist Thenmozhi Soundararajan was cancelled by Google after the company allegedly buckled under pressure from employees who claimed that their “lives were at risk” if Thenmozhi went ahead. The presentation was supposed to be part of the company’s Diversity Equity Inclusivity (DEI) program for employee sensitisation.

An expose by the Washington Post has revealed that groups of Google’s employees sent out mass emails through the company intranet, calling Thenmozhi, who is the Executive Director of Equality Labs, as “Hindu phobic” and “anti-Hindu.” The subsequent cancellation of the event is being seen as a direct fallout of a campaign by pro-Hindu groups inside Google. The issue also snowballed after Tanuja Gupta, the senior manager at Google who had invited Thenmozhi to deliver the talk, quit Google in protest after being pulled up for inviting her.

According to the Washington Post report, the employees at Google who opposed her talk claimed that “their lives were at risk by the discussion of caste equity.” The report added that the mail went out to a South Asian employees group with 8,000 people. When Tanuja posted the link to a petition to have the talk again (after it had been pulled), people on the group said that there is no caste in the US, caste discrimination does not exist, people from oppressed castes are less educated, and so on. The report also added that people called caste equity a form of ‘reverse discrimination against upper castes’ because of India’s reservation system.

Thenmozhi, who was formerly the president of Ambedkarites Association of North America (AANA), which has chapters across the US, Mexico and Canada, is a globally recognised anti-caste campaigner, and has been behind efforts to bring international attention to this South Asian system of social segregation. Her non-profit Equality Labs has been behind many anti-caste campaigns in the South Asian diaspora, including the Cisco caste harassment case that was admitted by a US court. DEI programs are becoming increasingly common in multinational companies but are mostly restricted to issues of race, gender and sexuality. Over the last few years, Dalit activists have been campaigning to have caste also included in these employee sensitisation programs.

“I cannot find the words to express just how traumatic and discriminatory Google’s actions were towards its employees and myself, as the company unlawfully cancelled a talk about caste equity. Google must address the casteism within its workforce that allows for these attacks to occur and continue,” Thenmozhi said in a statement.

Thenmozhi was scheduled to deliver the talk on April 18 to coincide with Dalit HIstory Month but was informed it had been postponed. She had then written to Google CEO Sundar Pichai saying that she was troubled by this development, and that her talk will only help Google’s employees understand the issue better.

“Caste discrimination, even unrecognized, is bad for business and it creates unsafe and hostile workplaces. In India, one of the largest markets for Google, caste-oppressed people comprise at least 25 to 30% of the market and are vital for capturing the next billion users,” she wrote, explaining why the resistance to caste conversations must be addressed. “This engagement will not only support your staff and many global reporters in better understanding and covering this structural South Asian issue, but also allow Google to better support caste-oppressed journalists in a meaningful way, especially at a time when they face so much violence for covering this issue,” she said.

In the letter to Pichai, Thenmozhi said they are both Tamil — while he is from a Brahmin family, she is from Dalit family. “Even a consultant like myself is facing casteist smears in the company you lead. Imagine what a caste-oppressed worker at Google would face if they dared to come forward,” she wrote.

“Despite us now being away from our homelands, the horror of caste has shaped us both. And as people of conscience, we have an imperative to not look the other way at how caste discrimination continues to grip our people relentlessly. As someone with caste privilege, you are now in the role to do the right thing to address this issue at a company where you have an opportunity to lead these conversations with grace,” she wrote, adding that every caste-oppressed person must get the same opportunity.

However, her talk was cancelled owing to resistance from a group of employees. Moreover, Tanuja Gupta, the Google employee who had been coordinating with Thenmozhi to organise her talk, was also targeted, with her team members being doxxed online.

In a statement, Equality Labs has condemned the cancellation of Thenmozhi’s talk, terming Google’s attitude as casteist and questioning the legitimacy of its diversity and inclusivity initiative. Equality Labs has said that Google has “allowed caste bigotry and harassment to run rampant in the company”.

The statement by Equality Labs said that Google employee Tanuja Gupta’s team members “were doxxed as a result of the planned talk, and their safety was jeopardized.” It added that Google’s management retaliated against Tanuja with an HR investigation and punitive corrective action that forced her to resign. Incidentally, Gupta was one of the organisers behind the walkout at Google in 2018 against the company’s manner of handling sexual harassment cases, and is also the founder of Googlers for Ending Forced Arbitration, a campaign that forced the company to rollback its policy of making employees forego their right to approach courts in the event of a dispute with their employer.

In her farewell letter to Google, Tanuja wrote that employees had escalated concerns about her for scheduling the talk. When Thenmozhi’s talk was initially put off, Tanuja had petitioned for it to be held. Her petition was then reported to the company for violating norms. Tanuja said she was informed that she had violated the People Manager Code of Conduct by inviting Thenmozhi, that she would receive a warning letter due to which her performance rating would be lowered and that, in turn, would affect compensation. Tanuja quit after this.

“Having been at the company for 11 years, I had many reasons for leaving, but this was the only one I needed. In the process of doing my job and promoting caste equity at the company, I saw four women of color harassed and silenced,” Tanuja Gupta wrote in her resignation email. “The reality is that these are not isolated events, this is a pattern.”

After Google cancelled her talk, Tanuja hosted a separate discussion in her personal capacity with Thenmozhi where the two spoke about caste discrimination and Equality Labs’ work in the US.

This new row at Google comes even as a US court is hearing a historic lawsuit filed by the California Department of Fair Employment and Housing against American multinational company Cisco for caste discrimination. A Dalit Indian-American employee had alleged that he was being discriminated against by two managers and Cisco has violated civil rights laws.

In 2018, an Equality Labs survey of 1,500 people on caste in the US had shown that 52% of Dalits and 25% of Shudras were worried about their caste being ‘outed’. The survey’s findings also showed 60% of Dalits experienced caste-based discrimination and two out of three reported being treated unfairly at the workplace.

In the wake of Thenmozhi’s talk being cancelled and the events after, Equality Labs has demanded that Google News be held accountable to protect its employees and that Google must add caste as a protected category. The News Minute

India forcing Kashmiri Pandits to migrate to pave way for...