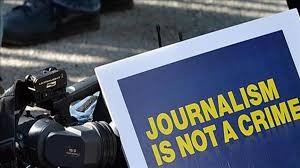 Srinagar: Newly-formed “Newspapers Coordination Committee” has vowed to fight the repressive policy adopted by the Indian authorities against media in the territory.

The committee consisting editors and publishers of all the daily and weekly newspapers representing seven newspapers associations said this during an extraordinary session held at Kashmir Press Club in Srinagar.

The meeting deliberated on the issue of continued harassment of the media persons, especially the owners, publishers and editors by the authorities through Department of Information and Public Relations.

Highlighting their commitment to the cause of journalism, they said that if the authorities continued its repressive policy against media, the media will fight it tooth and nail unanimously as this is not only the issue of earning bread and butter but to secure the sanctity of the noble profession.

The participants expressed their anger and anguish over the latest exercise which has been under taken by the Information Department of IIOJK to create discrepancies regarding the current circulation of various publications to nail and de-list them from the panel of the department.

The editors narrated their ordeal which they faced during the last 15 months of lockdowns and restrictions in the Kashmir valley. They said, “We were forced to close our publications, firstly post abrogation of Article-370 & 35A on 5th August 2019 onwards and then around March this year to follow the government guidelines/SOPs to fight Covid-19.”

All the representatives of 7 organizations elected Rasheed Rahi as the Chairman of the coordination committee titled as “Newspapers Coordination Committee”. It was then unanimously decided to make the authorities to understand right point of view, for which Chairman Rasheed Rahi was authorized to hold meetings with government representatives to stop them from this kind of onslaught on the fourth pillar of democracy.

Later, a 7-member committee was formed to represent the Newspapers Coordination Committee.