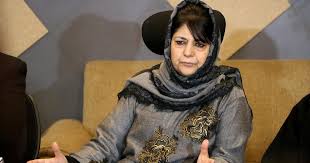 Srinagar: President of Peoples Democratic Party (PDP), Mehbooba Mufti has said that Kashmir has been under the worst form of siege since August 2019.

Referring to the farmer’s protest in India and the subsequent security measures taken by the Modi-led government, she wrote on twitter that concertina wires and trenches around farmer protests have shocked everyone but the sight is far too familiar for the Kashmiris.

“Concertina wires and trenches around farmer protests have shocked everyone but the sight is far too familiar for us Kashmiris. Kashmir has been under the worst form of siege since August 2019. The scale of suppression here is unimaginable,” she wrote on twitter.

Narendra Modi-led fascist Indian government had repealed the special status of IIOJK and placed it under strict military siege on August 05, 2019.

Mehbooba Mufti wrote that the ‘maze of wires, nails and trenches is combined with draconian laws, illegal detentions and massive troop deployment’. She maintained that Indian agencies hound political leaders and businessmen while FIRs and UAPA against journalists are methods adopted to choke dissent in IIOJK.

We understand the pain and humiliation inflicted on the farmers and stand in solidarity with them, the PDP leader said. Government of India cannot and mustn’t be allowed to ram bills against the consent of people and ruthlessly run roughshod over those who oppose and protest, she added.

Mehbooba Mufti also wrote on Twitter that party youth leader Waheed parra “was being persecuted and tortured to admit the false allegations. Since an admission didn’t happen he is being kept under inhuman conditions”. “This investigation has been fraudulent and politically motivated from day one,” she further added.

Para was arrested on November 25, 2020 in connection with a case for allegedly supporting the mujahideen. He was granted bail by a court of India’s National Investigation Agency (NIA) last month but was taken into custody by Counter Insurgency Kashmir (CIK) wing of Indian police in IIOJK.