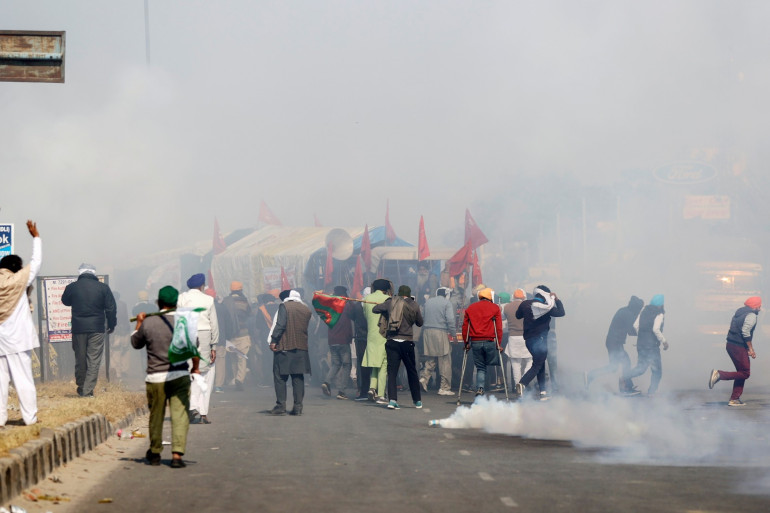 Police use tear gas and water cannon to disperse farmers who are trying to march to New Delhi against new laws that will leave farmers vulnerable to market.

New Delhi: Thousands of farmers have been stopped by police as they tried to march to the Indian capital as part of their DilliChalo (Go to Delhi) protest against new legislation passed by the right-wing government they say will curb their earnings and benefit big corporations.

At one site, the farmers retaliated by throwing bricks and pushing aside barricades.

After a two-hour stand-off, police eventually allowed the marchers to continue towards the capital.

The borders of the national capital have been sealed and metro services in several areas shut down with police saying no rallies were allowed in view of the coronavirus pandemic.

“If the government doesn’t want farmers to protest amid the corona pandemic why can’t the government say that it will defer the laws for six months or until the pandemic is over,“Jagmohan Singh, farmer leader from Punjab, told Al Jazeera.

“We will not call off our protest unless the government scraps these anti-farmer laws.”

The bills, passed by India’s parliament in September, make it easier for farmers to sell their produce directly to private buyers and enter into a contract with private companies. The government hopes private sector investments will stimulate growth.

Critics, however, say the changes will end the purchase of grains at prices guaranteed by the government and leave farmers vulnerable to the market.

Darshan Pal of the All India KisanSangharsh Coordination Committee (AIKSCC) and Punjab president of KrantikariKisan Union, said farmers have gathered on the Haryana-Punjab border but police used barricades and stopped them from marching to New Delhi.

Pal claimed 300,000 farmers are expected to reach New Delhi on tractors, buses and on foot after setting off from the state of Punjab. Al Jazeera, however, could not independently verify the numbers.

“They [government] have actually opened the markets, open the land and open the commodities of the farmers for the big corporate houses. They will form the mandis (agricultural markets), they will get the contract farming done and control the agribusiness.

Sukhdev Singh, Punjab general secretary of the BhartiyaKisan Union Ekta, accused the government of passing the laws “to benefit the big corporates”.

“The government didn’t find it worthy or important taking us onboard before bringing these black laws,” he told Al Jazeera.

Farmers have been protesting since September against the new laws, especially in the northern states of Punjab and Haryana, known as the grain bowls of India.

Farmers gather on a bridge as police block a road during a march to New Delhi. Police eventually allowed the marchers to continue towards the capital [AFP]

“Farmer organisations have been joined by others like the trade unions both here in New Delhi, and also in other states including Tamil Nadu, West Bengal, and Kerala. [They say] that the BJP government and its policies are against farmers and against workers.

“This is a really big issue in India because around half of the 1.3 billion people work in the agricultural sector. It’s a sector that has been in crises for decades for a number of reasons, including high indebtedness,” Puranam said.

The Al Jazeera correspondent said many people agree that the agriculture sector needs reforms but they say the laws passed by the Indian government leaves farmers at the mercy of private investors.

Critics, however, say the changes will end the purchase of grains at prices guaranteed by the government and leave farmers vulnerable to market [File: NarinderNanu/AFP]

“These laws loosen the rules around sale, pricing, storage – laws which had protected Indian farmers from the market for decades. This is what the farmers are worried about, even though the government says something of a minimum support price for produce will remain. Farmers say there will be no more guaranteed assurance of this,” she said.

Farmer groups from five states, including the AIKSCC, had called for the march.

A large deployment of police and paramilitary could be seen at all entry points into New Delhi. Vehicles were being checked and those with farmers were being asked to turn back.

The Hindu nationalist BJP, which also governs Haryana, says the laws will free farmers from traditional middlemen who dominate the trade.

The party accused the opposition Congress party, which governs Punjab state, of misleading the farmers.

“The opposition parties particularly the Congress party is misleading farmers about the laws. They are saying that MSP will be abolished which is not true, MSP is already existing even after the legislation was passed by the parliament,” Syed Zafar Islam, the BJP Spokesperson, told Al Jazeera.

“Nobody can take an inch of their land. The farmers have the apprehension that their land will be taken away by the corporates but nothing will happen.” Al Jazeera