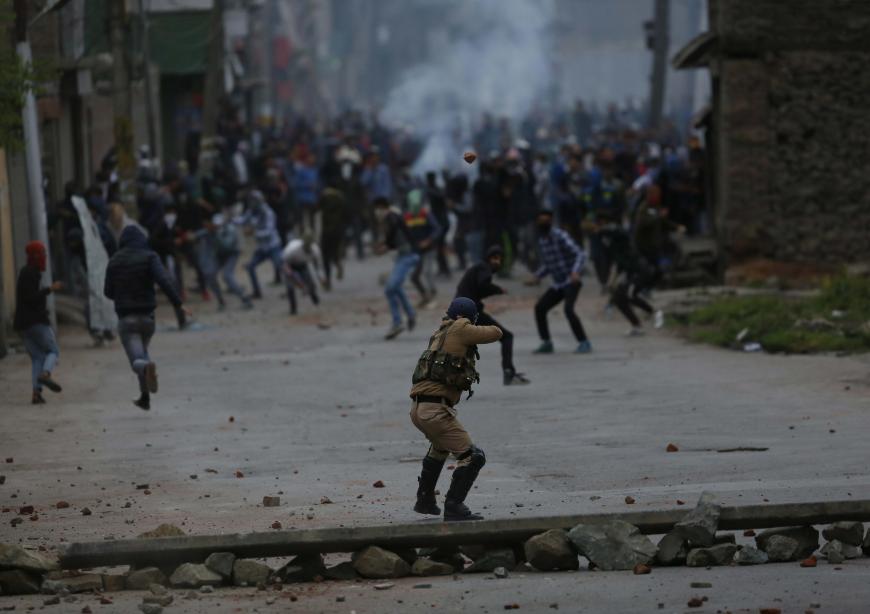 The forces opened fire after marchers in Muharram defied orders to disperse under a Covid-19 ban. This sparked violent protests in which some protesters threw stones, injuring 15 security personnel, according to the police.

“Time and again, Indian law enforcement’s use of shotguns in Kashmir has resulted in shocking, grievous injuries of protesters and bystanders,” said Meenakshi Ganguly, South Asia director at Human Rights Watch. “Indian authorities need to recognize that this weapon fired into crowds, even with violent demonstrators, will invariably cause indiscriminate and excessive injury in violation of international standards.”

Pellets fired from shotguns have caused thousands of injuries, including loss of eyesight, in the decade since Indian authorities first deployed them as an ostensibly “non-lethal” option for crowd control, to replace live ammunition. The move came after nearly 120 people were killed in Kashmir during weeks of violent protests in 2010.

Security forces typically use 12-gauge pump action guns to fire cartridges that are filled with dozens or hundreds of small metal pellets, which are sometimes referred to as “birdshot” or “dove shot” to reflect their role in hunting. While initially concentrated in a tight pattern as they are fired, the pellets spread out to create a constellation that can reach a wide radius, causing injuries indiscriminately, including to bystanders.

The Indian authorities have claimed that security forces use pellets only when necessary and in response to violence by protesters. However, international law bars any use of force, including against violent protesters, that causes indiscriminate or unnecessary harm.

Security forces’ use of shotguns in Kashmir has caused deaths as well as injuries. While there is no accurate data on casualties from shotgun-fired pellets, the Home Affairs Ministry told Parliament in February 2018 that 17 people had died from pellets between 2015 and 2017. According to the data journalism website IndiaSpend, pellets fired from shotguns blinded 139 people between July 2016 and February 2019. In January 2018, Jammu and Kashmir Chief Minister Mehbooba Mufti told the state assembly that 6,221 people had been injured by pellets between July 2016 and February 2017 and among them, 782 people had eye injuries.

The Office of the United Nations High Commissioner for Human Rights (OHCHR) has said that use of a shotgun “firing metal pellets is one of the most dangerous weapons used in Kashmir,” and has called for an immediate end to their use for crowd control.

In 2017, when questioned in parliament over the use of pellets, the Home Affairs Ministry said it had explored other non-lethal alternatives to disperse crowds, but that “if these measures prove to be ineffective in dispersing of rioters, use of pellet guns may be resorted to.” In December 2016, the Supreme Court said that the these weapons should not be used “indiscriminately or excessively” in Kashmir and that the authorities should use them only after “proper application of mind.”

In August 2016, the security forces told the Jammu and Kashmir High Court that it used cartridges containing 450 metal pellets each. The government has refused to release information on the metal used in these cartridges, citing national security concerns, though a doctor in Srinagar said they were usually a “lead ball.” While smaller pellets usually cause painful but superficial injuries, they can also be lethal when they strike vulnerable body parts such as the eyes. Government statements also reveal that paramilitary forces in Jammu and Kashmir are given only a three-day special training on the use of less-lethal weapons, including shotguns.

The UN Basic Principles on the Use of Force and Firearms “[p]rohibit the use of those firearms and ammunition that cause unwarranted injury or present an unwarranted risk.” The UN Human Rights Committee, which monitors compliance with the International Covenant on Civil and Political Rights, stated in its General Comment No. 37 that “Firearms are not an appropriate tool for the policing of assemblies, and must never be used simply to disperse an assembly.… [A]ny use of firearms by law enforcement officials in the context of assemblies must be limited to targeted individuals in circumstances in which it is strictly necessary to confront an imminent threat of death or serious injury.”

The 2020 UN guidance on “less-lethal weapons” in law enforcement says, “Multiple projectiles fired at the same time are inaccurate and, in general, their use cannot comply with the principles of necessity and proportionality. Metal pellets, such as those fired from shotguns, should never be used.”

“Indian leaders who claim that their policies are improving the lives of Kashmiris cannot disregard that security forces are maiming, blinding, and killing people,” Ganguly said. “The Indian government should cease the use of shotguns firing metal pellets and review its crowd control techniques to meet international standards.”

Trump administration claims it is ending wars in Iraq and...