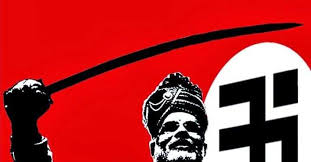 New Delhi: Indian Prime Minister Narendra Modi threatened to turn the country into a one-party state [a fascist state], The Economist reported in an article citing the premier’s continues erosion of checks and balances.

India’s prisons hold twice as many inmates awaiting trial, some 330,000 people, as they do convicts.

“A majority of these “under-trials” come from minority groups and a quarter have spent more than a year behind bars,” said Leah Verghese, a law researcher.

When the Modi-led government annexed the special status on Indian Illegally Occupied Jammu and Kashmir (IIOJK) in August 2019 thousands of its residents were detained.

The Indian court entertained only a handful habeas corpus petitions.

“Judges have yet to take up include the imposition last year of direct rule on Kashmir and some 140 legal petitions against the Citizenship Amendment Act of 2019, which by inserting religion as a criterion for citizenship undermines the secular nature of the Indian state,” The Economist reported.

“This government has done so much damage to personal liberty,” says Ajit Prakash Shah, a former high court judge. “But the courts, especially the supreme court, have watched this indiscriminate and violent trampling of dissent like mute spectators.”

“Legal professionals now liken the current moment to that darkest period for Indian democracy,” the article stated, adding, many cogs in India’s institutional machinery are not merely complacent, but have grown complicit in a project that threatens to turn the country into a one-party state.”

The Economist quoted Vice-Dean of law at Oxford University and author of a paper, “Killing a Constitution with a Thousand Cuts”, Tarunabh Khaitan, that at least during the emergency the threat was clear that details India’s institutional decay.

“What we have now is a wolf in sheep’s clothing,” he says. “There is no full-frontal big-ticket attack on democracy, but there are multiple, simultaneous attacks on all fronts.… We are sleepwalking into authoritarianism.”

The top officers in the force had been filmed standing next to a BJP politician at a rally where he threatened to attack protesters, mostly Muslims, holding a peaceful sit-in against the new citizenship law.

“During the violence, police were filmed throwing rocks and torturing captured Muslim youths. More than two-thirds of those beaten, shot and hacked to death were Muslim. Yet Delhi’s finest have declined to register complaints against BJP members for incitement,” the article said.

An amendment made last year to the Unlawful Activities Prevention Act (UAPA), a draconian law from 1967 that allowed the state to label and then ban groups as a terrorist, now empowered the government to designate any individual as a terrorist.

The article further reported that in 2019 the government amended the RTI law. It reduced the tenure and prestige of the role of the commission’s chief. “Small wonder that the commission is rejecting a growing number of information requests from the public, citing ‘insufficient documentation’, even as the number of pending requests has swollen by 50%.”

The article reported that Modi ignored institutional precedent in the Indian army, lifting General Bipin Rawat over the heads of two senior officers to appoint him its top commander.

“Mr Modi has made a spectacle of his own commander-in-chief role as no other recent prime minister, and also minted electoral gold from pre-election military operations. Helpfully, India’s soldiers have remained silent at useful moments, too. As independent satellite evidence emerged this summer showing that Chinese forces had occupied strategic posts in territory claimed by India along remote sections of the countries’ border, the army steadfastly refused to comment on Indian government assertions that no land had been lost.” The Economist stated.

The Economist reported that in the absence of strong opposition at the centre, the most effective resistance to the BJP’s dominance lies in state capitals, as well in the press and more broadly in civil society.

“Opposition parties holding slim majorities in other big states, including Rajasthan and Maharashtra, are acutely aware of the BJP’s capacity to “persuade” defectors to its side. This recently happened in Madhya Pradesh, where Mr Modi’s party unceremoniously unseated Congress after luring away a chunk of its deputies,” The Economist reported.

The Modi government has largely marginalised critical voices in the press by leaning on the big conglomerates that dominate the mainstream media, by favouring outlets that share its ideology and by flooding social media with agitprop, the article reported.

“In the past two months, new rules have curtailed the permitted level of foreign investment in online media and placed the entire sector under the authority of the broadcasting ministry. The moves appear to be aimed at getting a grip on one of the main remaining outlets for dissent, say editors at three of India’s increasingly popular news sites,” The Economist reported.

“We do not have a level playing field any more. What we are getting is not quite a one-party state, but certainly a hegemonic state,” Oxford law Professor Khaitan said.

Modi’s one-party system can also be detected in him showing keen interest in reshaping New Delhi. It would have 10 identical government office buildings. The project also included expanding the parliament to double the current 545 MPs seat whereas the old building would become a “Museum of Democracy”.

Furthermore, the difference in Modi’s “read-outs” after his congratulatory phone call to President-elect Joe Biden also point out Modi’s agenda for the country. KMS