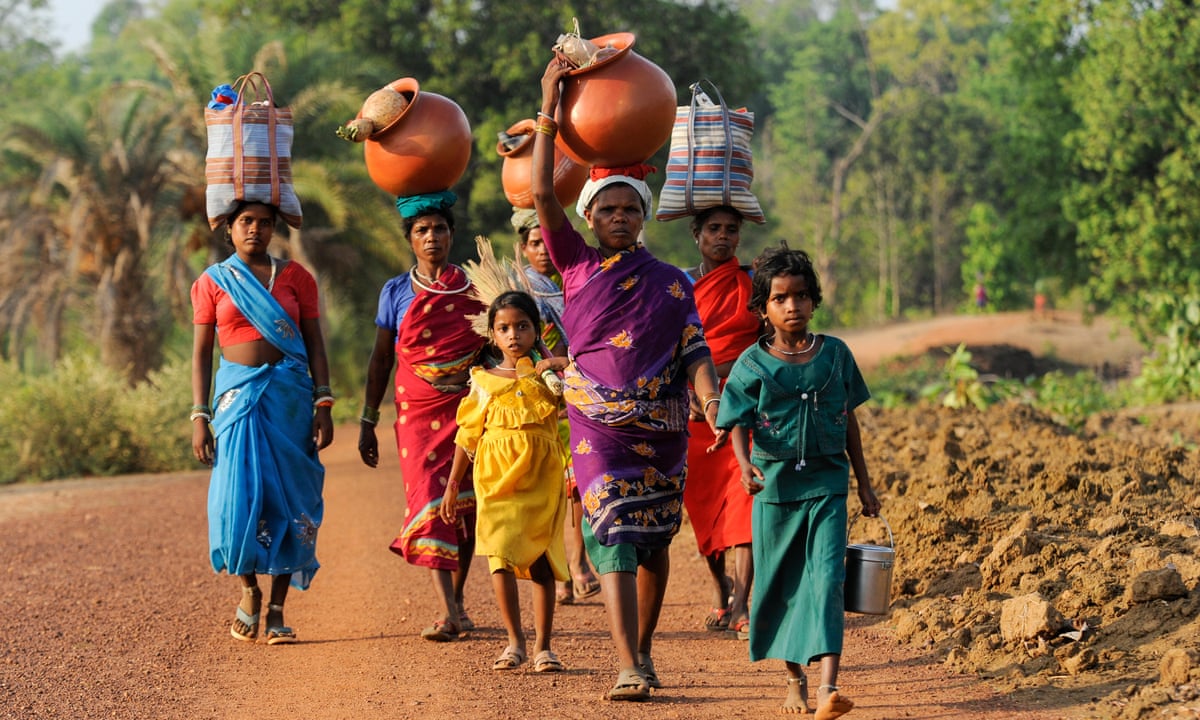 On 5 January 2020, Naresh Koch, a detainee in the Goalpara detention centre in Assam, breathed his last breath at the Guwahati Medical College and Hospital. He became the 29th person who had died in detention since 2014.

Naresh was from the Koch Indigenous community. He married Jinu from the Garo tribe of Meghalaya and settled down in Assam. During the National Register of Citizenship (NRC) process, he was denied Indian citizenship even though his son and brother were included in the register.

Naresh was arrested by the police and the foreign tribunal proclaimed him to be a ‘Declared Foreign National’ (DFN). After his arrest, his wife Jinu lost her job and she wasn’t able to afford the travel to visit her husband in the detention centre. After two years, in December 2019, a police team visited Jinu to inform her about her husband’s declining health and requested that she visit him immediately in the hospital. She was able to visit Naresh, with the support of the police, before she ultimately lost him.

What happened to Naresh, Jinu and their family is one of the worst examples of the impact the NRC and new Citizenship Amendment Act (CAA) is having on the Adivasis and Tribal Peoples in India.

Indigenous Peoples in India have been facing countless attacks and threats against their rights – especially to land, self-determination and autonomy – for centuries. If we look at 2019 alone, a Supreme Court order called for the eviction of more than a million families; a new discriminatory forest policy was being drafted by the Ministry of Environment, Forest and Climate Change (MoEF&CC); and authorities planned to revise the current Indian Forest Act (1927) without the inclusion and consultation of Indigenous and forest-dwelling communities themselves.

The CAA, passed in December 2019, is of great concern to Indigenous Peoples, who feel that this is yet another threat adding to their insecurity when it comes to the state’s responsibility to uphold and protect the rights of Indigenous Peoples. The bill provides citizenship to religious minorities from Pakistan, Bangladesh and Afghanistan, and the government, led by the Hindu nationalist Bharatiya Janata Party (BJP), says this will give sanctuary to people fleeing religious persecution.

However, Indigenous Peoples fear that the CAA will render millions of them stateless because they will not be able to provide the necessary documents to prove their citizenship when the CAA is implemented through such mechanisms as the NRC, which was piloted in the state of Assam. Indigenous Peoples have no trust in a just and fair list being created and fear they will be forcefully evicted from their ancestral lands, doomed to live in detention centres, since they will not be able to prove their citizenship.

The CAA sparked massive protests from different angles and for different reasons – the Indigenous Peoples of Northeast India feared a massive influx of outsiders threatening their democratic majority and natural resources, whereas other protesters challenged the constitutionality of the act, or condemned the anti-Muslim sentiments of the act. No matter the reason, this is the first time that demonstrations of this scale have been organised since the BJP came to power, indicating that challenging the secular nature of the Indian constitution is not a popular move and will be protested.

The Government of India released its final citizenship register from the Assam pilot project on 31 August 2019, showing the exclusion of nearly 2 million people from the NRC. As per a preliminary survey, 100,000 Indigenous Peoples were part of that excluded group – including 25,000 Bodos, 12,000 Reangs, 8,000 Hajongs and 55,000 other tribal communities. The Asian Centre for Human Rights claims that 36,000 Reangs in Hailakandi district were excluded from the NRC, indicating that the official figures are misleading.

While the percentage of tribal peoples excluded in relation to the total number of people affected may seem small, if the NRC/CAA is enforced nationwide, this will have a terrible impact on the Adivasis. These impacts would include:

If the NRC/CAA is enforced in all states of India, millions of Adivasis/Tribals will lose their citizenship, precisely because they won’t be able to provide documents. For instance, in the Saranda forest of Jharkhand, Adivasis of 17 villages do not possess any government documents to prove their existence.

Similarly, there are millions of displaced Adivasis who do not have any documents after losing their land and habitation. There are also hundreds of nomadic and forest-dependent Adivasi communities like the Birhor, Birjiya, Sabar and Jarwa, among others, who simply cannot provide any personal documentation as they keep moving from one place to another throughout the year.

Furthermore, there are groups of Adivasis who simply do not believe in the idea of the state, such as the Adivasis who have been claiming their autonomy through the Pathalgari Movement and have burnt all their government documents because they deny the existence of the state.

Additionally, those who do possess the required documents could also be denied citizenship. We have seen that the documents are no guarantee in other cases; for instance, millions of Adivasis who have documents to prove their land claims under the Forest Rights Act (FRA) were denied their claims because they either didn’t pay bribes to government officials or the mineral resources available in their land were considered more valuable than upholding legal land claims.[4]

The NRC/CAA violates the right to a dignified life of Adivasis and may lead to exclusion, torture and death. For example, the Adivasis who were excluded from the NRC in Assam were held in detention centres in terrible conditions, classified as DFNs, like Naresh was, and tortured. In the worst cases, a few of them, like Naresh, have already died in these detention centres.

On 27 November 2019, the Union Minister of State for Home Affairs, Nityanand Rai informed the Parliament that 988 people are now lodged in six detention camps, of which 957 were declared as foreigners and 31 are their children.[5]

It has been clearly stated in Paragraph 4, Section 3 of the CAA that it will not be enforced in the Sixth Schedule Areas. Scheduled areas are constitutionally set-up regions that were put into effect to protect Indigenous Peoples in pre-colonial times. This non-enforcement could mean that newly made citizens will be resettled in the Fifth Schedule Areas. In 2011, India received 5.4 million immigrants, of which Bangladeshi immigrants were the largest group[6], who are locally referred to as ‘intruders’ by some.

It is feared by many Adivasis that the NRC/CAA will further increase the cases of land alienation, and once the ‘intruders’ are relocated in Fifth Schedule Areas, it is further feared they will start grabbing Adivasis land.

The state of Jharkhand is a crucial example to understand the demographic change caused by the influx of mainstream populations. The state was formed in 2000. In the early 1950s the tribal population of the region was 36 per cent of the total population[9], however by 2011 it has declined to 26.2 per cent[10] as non-tribals moved into the state.

Similarly, before the establishment of the Tata Steel Company in 1907 in Sakchi and Kalamati, in the East Singhbhum district of Jharkhand, 95 per cent of the population in the region were Adivasis. In 2011 that population drastically decreased to only 5 per cent. Almost all the Indian cities that have been developed on Adivasis land have more or less experienced the same changes.

Such demographic changes will have a direct impact on the reservation status of these protected areas. If the population of Adivasis decreases, the reserved seats for them in government jobs, the Legislative Assembly and Parliament will also decrease, effectively engineering the NRC/CAA as a tool for the extinction of the Adivasis.

The NRC/CAA will also have an impact on the language and culture of the Adivasis. In the areas where Adivasis population has decreased due to industrialisation and urbanisation, Adivasis have lost their languages and culture. The Adivasis are termed as uncivilised, barbarians, backward and primitive by the general population, and at the same time, the government attempts to assimilate Adivasis through mainstreaming, which continues the process of erasing language and culture. Therefore, the fear of so-called ‘intruders’ relocated to Fifth Schedule Areas also translates into a threat to Adivasis languages and culture.

There is no question that the NRC/CAA will have an adverse effect on the Adivasis of the Fifth Schedule Areas across 10 states in India. If the NRC/CAA is enforced nationwide, millions of Adivasis will lose their citizenship, be detained in detention camps and ‘intruders’ will be relocated to Adivasis land, impacting population, land tenure, resource management and cultural loss. This must not be allowed.

Adivasis are the first settlers of India, therefore, they must be kept out of the NRC/CAA. The civil and political rights, as well as the economic, social and cultural rights, of Adivasis, which need to be protected, are now under their gravest threat. IWGIA

PM demands UNSC to honour their commitment of holding free,...