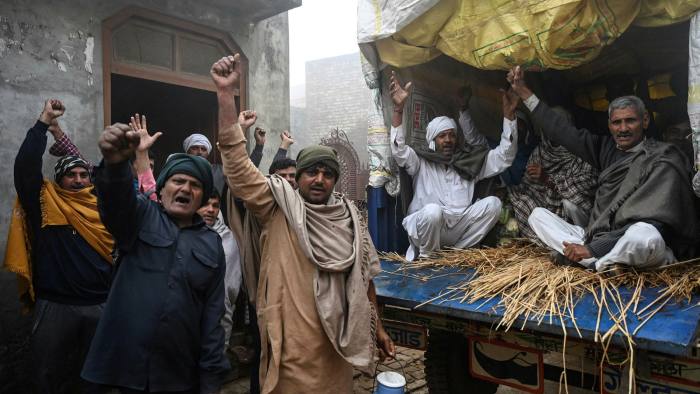 After nearly seven years in power, India’s premier Narendra Modi is facing his biggest political challenge yet — from protesting farmers camped out on key routes into New Delhi. Perhaps no area of the economy is as ripe for reform as agriculture. But mishandling of the issue by Modi’s Bharatiya Janata party has once again provoked discontent and highlighted the shortcomings of his hard-driving approach. His response has been to lash out at supposed enemies at home and abroad — including the arrest last weekend of a 21-year-old environmentalist, interrogated for sedition after sharing a protest toolkit promoted by the Swedish climate campaigner Greta Thunberg.

Few dispute that agricultural reform is needed. The current system dates back 60 years to an era when shortages were common. Encouraging farmers to sell wheat and rice at set prices through markets managed by state committees helped to stabilise food supplies, but today it results in overproduction, with millions of tonnes of grain in storage. Intensive grain farming has led to dwindling groundwater and pollution from stubble-burning. Yet many Indians lack more nutritious foods such as proteins, fruit and vegetables.

Getting farm reform right is vital; the sector employs 40 per cent of the population. Three acts passed by the BJP probably go in the right direction. The government says allowing contract farming and permitting companies to buy crops directly from farmers outside state-regulated markets will both “liberate” growers and encourage more private investment. But farmers fear a partial withdrawal of the state would leave them vulnerable to exploitation by agribusiness and corporate interests. The reforms also failed either to build in transitional safeguards or set out a vision for the future of agriculture that they aim to achieve.

The episode highlights two tendencies of Modi and his party. One is to ram measures through without consultation or consensus-building. The same was true of the disruptive 2016 demonetisation of large banknotes, and discriminatory citizenship law of 2019. This time, two coalition partners split with the BJP over the farm reforms. The plans were rushed through parliament without committee scrutiny in September, adopted by acclamation in the upper house where it is unclear if they had a majority.

The second is the habit, when confronted by opposition, to respond with conspiracy theories and authoritarian clampdowns. In fairness, the government has engaged in 11 rounds of talks with farmers and offered to hold off implementing the reforms for 18 months, but the farmers insist they must be withdrawn. Yet Modi has sought to suggest that many protesters are Sikh separatists, or part of an international plot against the government. As well as last week’s egregious arrest of the 21-year-old environmentalist, New Delhi is pressing Twitter to block hundreds of accounts that the government claims have tried to incite unrest.

All this points to the limits of Modi’s political style: he has the right reform instincts but appears better at stoking culture wars than achieving real change. Yet while the last big protests were by Muslims who were never BJP supporters, many farmers — attracted by the party’s Hindu nationalism and hardline stance on Pakistan — voted for him in 2019 but now feel betrayed. The vast agricultural community is not one any Indian premier should want to alienate, and the farmers are digging in for a long fight. Modi will need to find the capacity to reverse — at least partially — and compromise, something that he has rarely displayed before. Financial Times