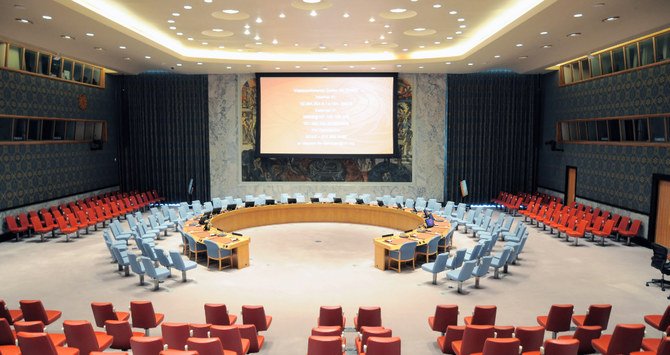 New York: Geir Pedersen, the UN’s special envoy to Syria, called for a show of solidarity from the international community and for nations to overcome their differences to support the nation’s peace process.

His comments came shortly after the Security Council’s latest meeting about Syria, which took place behind closed doors. Barbara Woodward, the UK’s permanent representative to the UN, said the session was held in private “due to a pressure from a member state.”

What little information emerged from the meeting was supplied by Pedersen, who said he was heartened by the “strong support” from member states for his team’s work as it continues to try and find a solution to the crisis.

The Small Body of Syria’s Constitutional Committee concluded its fifth round of talks in Geneva late last month. Pedersen said he had hoped work would begin on drafting a new constitution but, as he told the Security Council, the talks ended up as “a missed opportunity and a disappointment.”

The first hurdle that emerged was the issue of a proposed procedure. Pedersen said that two proposals were presented in Geneva: one that he drafted and another from the co-chair of the Syrian National Council. The government co-chair did not accept either of them.

With one side proposing that work continued at the existing pace and under the same rules, while the other wanted an overhaul of the process to meet a specific timeline and allow for longer, more regular meetings, the committee was left with no future work plan, said Pedersen.

He told the council that the committee’s working method needs to change, and that he will have to see “credible engagement” to ensure that “if the committee reconvenes, it will function properly, work expeditiously, and achieve some results and continued progress in line with the terms of reference that we have already agreed upon.”

Although many of the issues of concern to the committee members are neither constitutional nor “even in the hands of the Syrians themselves,” Pedersen said he told the Security Council that they are all linked.

“I stressed that no one actor or existing group of actors — Syrian or foreign — can determine the political settlement of the conflict. It must be negotiated,” he added. “While everyone accepts that, most players seem keen for the other side to move first.”

In a broader context, Pedersen stressed the need for “a constructive international diplomacy on Syria.” Without this, he warned, there will be no progress in any talks, constitutional or otherwise, especially in an atmosphere dominated by “a lack of trust and confidence, a lack of political will to compromise — and a lack of political space to compromise, too.”

That lack of trust and confidence could be overcome if the international community can come together, he said, and if individual nations can resolve their differences and agree realistic “mutual and reciprocal” steps “to generate movement on the issues in resolution 2254,” which sets out the UN road map for peace in Syria.

Pedersen will attend the Astana talks between Russia, Turkey and Iran on Syrian reconciliation, which are scheduled to take place in the Russian Black Sea resort of Sochi on Feb. 16 and 17.

The Syrian Constitutional Committee was set up under a resolution adopted during the Syrian National Dialogue Congress in Sochi in January 2018. It includes 150 delegates, with 50 representing each of the government, the opposition and civil society. They are tasked with developing recommendations for constitutional reforms ahead of UN-brokered general elections. The committee’s Small Body includes 45 delegates, 15 from each of the three groups. Arab News