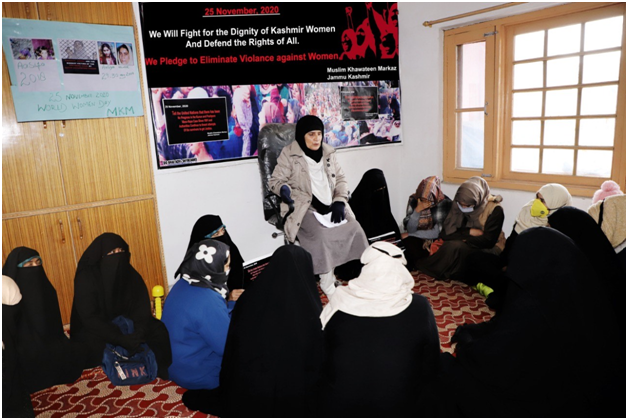 Srinagar: In Indian illegally occupied Jammu and Kashmir, speakers at a one-day seminar have called upon the international community to take India to task for perpetrating war crimes in terms of sexual and physical harassment of women in the territory.
The event was organized by Jammu and Kashmir Muslim KhawateenMarkaz at its office in Srinagar on the International Day for the Elimination of Violence against Women.
The participants while expressing sympathies with rape and pellet victims in IIOJK said, Kashmiri women are facing widespread violations of human rights. They also asked for launching a campaign to end violence against women in the occupied territory.
The Jammu and Kashmir Muslim KhawateenMarkaz Chairperson Yasmeen Raja in her address said that Indian forces were systematically using rape to terrorize the entire Kashmiri population.
She said the Kashmiri women are routinely harassed and raped by Indian forces who are using rape as a method of retaliation against the Kashmiri civilians for staging anti-India protests against frequent cordon and search operations. She added that Indian soldiers enter a civilian house, kill or evict the men before raping the women. KMS

No country can rival Pakistan in desire for Afghan peace

India using molestation of women as a weapon of war...