Subscribe Us
HomeInformationIndia using molestation of women as a weapon of war to suppress Kashmiris
Information, NGO, Peace Promoters 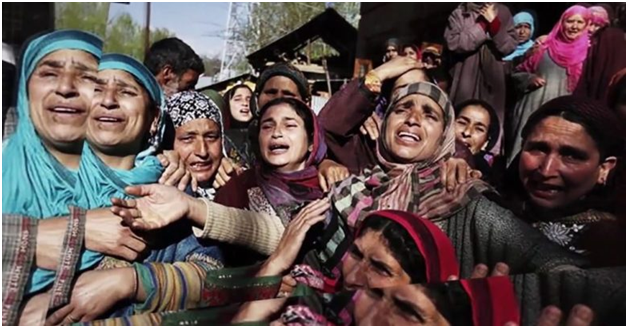 Srinagar: In Indian illegally Occupied Jammu and occupied Kashmir, the All Parties Hurriyat Conference and other Hurriyat leaders and organizations have deplored that India is using molestation of women as a weapon of war to suppress the Kashmiris’ just struggle for securing their inalienable right to self-determination.

The APHC General Secretary, Molvi Bashir Ahmed Irfani, in a statement issuedon the occasion of International Day for the Elimination of Violence against Women said that the international human rights organizations including Amnesty International and Human Rights Watch had reported the brutal incidents of torture and molestation of women in IIOJK and such incidents were on the rise in the territory.

He said that thousands of women had been martyred by Indian troops for their affiliation with the ongoing freedom movement and many others including AasiyaAndrabi were still imprisoned in various jails of IIOJK and India and were being continuously subjected to mental and physical torture.

Molvi Bashir Ahmed said the extreme of the Indian Army’s brutality in IIOJK is the fact that Indian beasts enter homes during cordon and search operations, kill or evict men and molest the women. The atrocious behavior of the Indian Army can be gauged from the fact that scholar ShubhMathur has termed rape as an essential element of Indian military strategy in Kashmir, he said.

APHC leader and the patron of Jammu and Kashmir Mass Movement, Farida Bahenji, in her statement said that Indian occupational forces were victimizing the Kashmiri women for their role in the ongoing freedom struggle. “Incidents of violence and rape against women are part of Indian military strategy.

Around a hundred women were gang-raped by Indian troops in Kunanposhpora area of Kupwara in 1991. Aasiya and Neelofar were targeted in 2009 in Shopian and even 9-year-old Asifa was not spared,” she said. Farida Bahenji said that since August 05, 2019 there had been a sharp increase in this brutality. “In such a situation, the silence of the human rights organizations is surprising. They have to raise their voice against Indian brutalities and the violence against women in IIOJK must be stopped,” she added.

A spokesman of Jammu and Kashmir Employees Movement in a statement in Srinagar expressed serious concern over the continued illegal detention of Dukhtaran-e-Millat Chairperson, AasiyaAndrabi, and her associates, NaheedaNasreen and Fehmeeda Sufi, in New Delhi’s infamous Tihar Jail. He said that AasiyaAndrabi was suffering from various ailments and no proper treatment was being given to her. He said that her health could deteriorate further due to continued detention. He said that a large number of Hurriyat leaders and activists detained in Kashmir and Indian jails were at high risk of contracting coronavirus and should be released immediately.

Jammu and Kashmir Tehreek-e-Istiqamat Vice Chairman, Gulshan Ahmed, in a statement said that Indian forces were targeting Kashmiri women to weaken the Kashmiris’ resolve for freedom. He, however, made it clear that such brutal tactics could not stop the Kashmiris from pursuing their struggle for right to self-determination.kmsnews.org

Int’l community should take action against India for committing war...