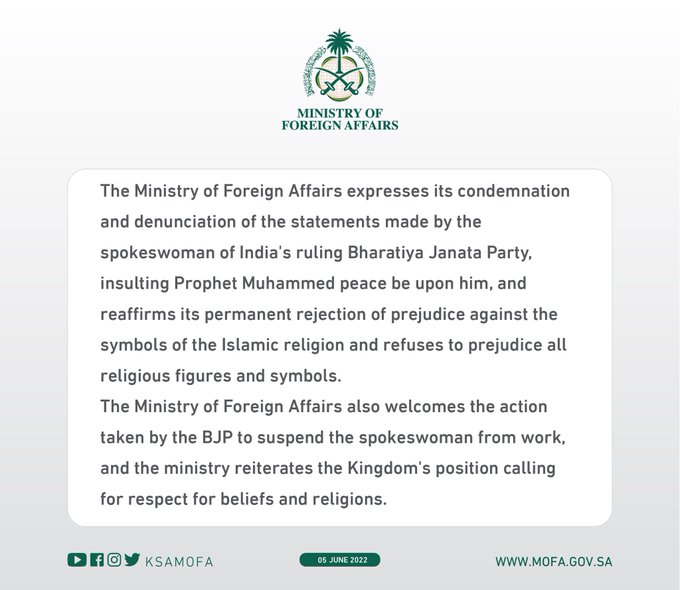 New Delhi: Iran, Kuwait and Saudi Arabia on Sunday lodged official protests against the controversial remarks on Prophet Muhammad (peace be upon him) made by two Bharatiya Janata Party spokespersons, PTI reported.

Earlier, Qatar had demanded a public apology from the Indian government.

The controversy erupted after BJP spokespersons Nupur Sharma and Naveen Jindal made derogatory remarks about Prophet Muhammad last week. Sharma was suspended and Jindal expelled by the BJP on Sunday.

Many West Asian countries expressed wide discontent over Sharma’s remarks and summoned Indian envoys. Several hashtags calling for the boycott of Indian products were seen trending on Twitter in Arab countries on Sunday.

The foreign ministry of Qatar had summoned India’s Ambassador, Deepak Mittal, on Sunday afternoon to explain the comments made by the two BJP spokespersons. Notably, Vice President M Venkaiah Naidu is on an official three-day visit to Qatar.

Qatar also told the Indian government that if such Islamophobic remarks go unpunished, it may “lead to further prejudice and marginalization, which will create a cycle of violence and hate”.

The foreign ministry of Kuwait also summoned the Indian ambassador to the country, Sibi George, and handed over an official protest note. The note by the assistant secretary of state for Asia Affairs expressed Kuwait’s “categorical rejection and condemnation” of the statements made by Sharma and Jindal, PTI reported.

Kuwait, however, welcomed the BJP’s decision to suspend Sharma from the party.

In Tehran, the director general of South Asia summoned the Indian Ambassador Dhamu Gaddam to lodge Iran’s protest on the matter.

Saudi Arabia, also issued a formal protest to reject the “prejudice against the symbols of the Islamis religion”.

In response, the Indian Embassy in Qatar and Kuwait said that the comments had been made by “fringe elements” and that they did not reflect the views of New Delhi.

India said that strong action has already been taken against those who had made derogatory remarks.

“A statement has also been issued by concerned quarters emphasizing respect for all religions, denouncing insult to any religious personality or demeaning any religion or sect,” the Indian Embassy in Doha said.

India has the largest expatriate population in several of the Gulf nations, with official data showing that nearly 6.5 million Indians live in the region, according to The Indian Express. Apart from being dependent on crude oil and gas, India also enjoys trading relations with many of these countries in the region. Scroll. In

Myanmar junta to carry out death sentences against activist, NLD...