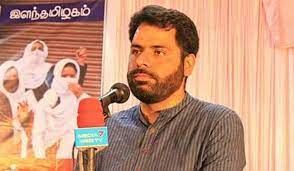 International recognition of his work as a human rights activist and journalist prove that international community is aware of Indian government / state’s involvement in grave nature of human rights abuses in IIOJK. ‘Time Magazine’ has called Parvez “a modern-day David who gave a voice to families that lost their children to enforced disappearances” by Indian state.

He has extensively worked on documenting the abuses committed by Indian security forces as coordinator of JKCCS and published more than a dozen reports on human rights abuses in Kashmir and its last report, ‘Kashmir’s Internet Siege’ focused on the mass detentions and the reported breakdown of judicial system in IIOJK post revocation of Article 370.

Khurram Parvez was arrested by India’s anti-terrorism investigation agency (NIA) on 22nd Nov 21 in a concocted case of ‘terror funding’. World Organization against Torture (OMCT), a Geneva based HR organization stated on his arrest, “We are deeply concerned about the high risk of torture while in custody. We call for his immediate release”.

Khurram Parvez has been penalized by Indian fascist regime because of his efforts to highlight violations of human rights in IIOJK by Indian occupational forces. According to UN rights experts, Parvez had been a victim of a number of incidents of reprisals reportedly for sharing information regarding rights violations with the UN, “as documented in various reports of the Secretary-General and communications from UN special procedures mandate holders.” Web Desk