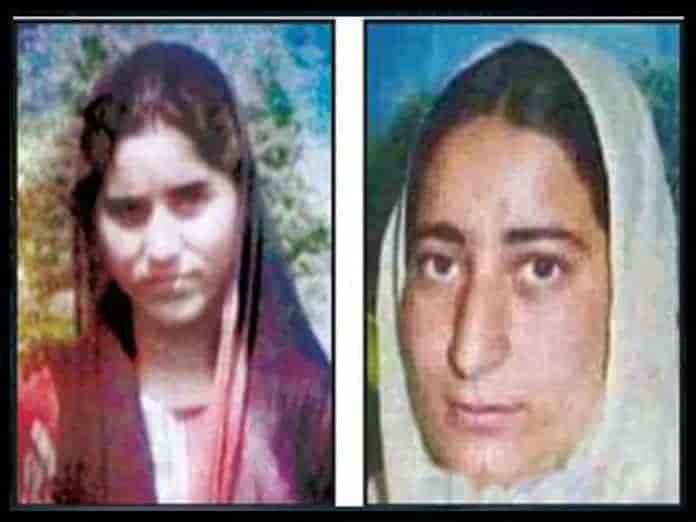 On 29 May 2009, Nilofar Jan (22) and her sister-in-law Asiya Jan (17) were allegedly raped and murdered in south Kashmir’s Shopian district.

Their bodies were found by the side of a local stream outside the town. Neelofer and Asiya’s family alleged that they had been abducted, raped and murdered by members of the Indian security forces. In the immediate aftermath, the enraged villagers protested and Indian government had imposed curfew that went on for at least forty-seven days.

The then Chief Minister, Omar Abdullah of the National Conference appointed Justice Muzzafar Jan to investigate the matter. The Jan’s Commission found in its report that the women were raped and murdered by “men in uniform”.  Kashmiri women are the worst victims of Indian state terrorism in IIOJK and they have faced harassment, abuse and sexual violence at the hands of Indian forces for the last over seven decades particularly since 1989 when the Kashmiris intensified their freedom struggle.

The state agencies were unanimous in describing the death of the two hapless girls as “rape and murder”. They failed only in identifying the perpetrators of the crime or they did not want to identify the culprits. Then Chief Justice Barin Gosh, who, along with Justice Mohammad Yaqoob Mir, was monitoring the SIT investigations, on one occasion, declared in full Court; there is good news. The culprit has left behind enough evidence which could lead to him. On July 23, 2009, Chief Justice said that the arrested policemen (SP Javed matto, DSP Rohit Baskotra, Inspector Shafiq Ahmad (then SHO Shopian), the Sub-Inspector, Gazi Abdul Karim, and the Legal Cell Head, Forensic Science Laboratory, Javaid Iqbal Hafiz (who were arrested at the recommendations of the Jan Commission for destroying evidence) were either involved or knew the guilty. The High Court had earlier (on July 3, 2009) ordered interrogation and Norco analysis of the arrested policemen.

But it was, in fact, the government that did not want to identify and arrest the culprits. Government appeared to be suffering with the problem of credibility. It did not want to against the line chief minister had taken in his very first reaction when he called it a case of drowning. As the SIT and Justice Jan Commission, both, had rejected the drowning theory, it made Omar Abdullah scary. On September 9 (2009), the Omar government handed over the case to CBI notwithstanding the fact High Court (on August 12) had directed the state government not to do so till September 30. Another gross violation of the court orders was committed when CBI brought a team of doctors from Delhi for exhumation of Asiya and Nelofar’s bodies. There were standing orders from the Division Bench of the High Court that if exhumation was needed during the process of investigations it should be done by the Principal of Government Medical College Srinagar, who would nominate the team.

The way CBI investigated the incident and concluded its findings, it looked that the agency tried from day one to make it a case of drowning. Though this theory was rejected by, both, Jan Commission and the SIT. CBI reversed the whole process of investigations and said that no rape and murder had taken place. The CBI recorded all the statements of related people at its Humhama camp. They visited Shopian only to record the distance to the house of the victims from the site of crime just to prove that Asiya and Neelofar attempted to cross the water stream to reach their home earlier and got drowned. Shakeel Ahangar, husband of Neelofar and brother of Asiya, alleged that what he narrated to CBI was not recorded. At the conclusion of the inquiry CBI simply proved Omar Abdullah ‘right’.

Indian forces are using rape as a tool to humiliate the Kashmiris and intimidate them into submission. Indian forces’ personnel have raped 11,255 women since January 1989 till date in IIOJK. Indian troops are deliberately targeting the Kashmiri women to suppress the Kashmiris’ ongoing struggle for securing freedom from India’s illegal occupation of their soil. Indian’s illegal occupation in Jammu and Kashmir is the main cause of victimization of women in IIOJK. World community must hold India accountable for its atrocities especially for using rape as a weapon of war in IIOJK.