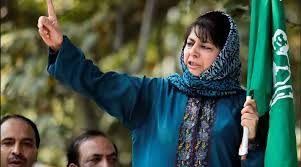 Srinagar: The former Chief Minister of Jammu and Kashmir was allegedly “put under house arrest” and not allowed to visit the Pulwama residence of party leader Waheed Parra who was arrested by the NIA.
The Police disallowed PDP president Mehbooba Mufti’s press conference here. A group of policemen stopped journalists few yards short of Mufti’s ‘Fairview’ residence in the Gupkar area of the city here, where she was scheduled to address the media.
The policemen said the press conference of the PDP president was not allowed as per the orders from the higher ups.
Mehbooba had invited journalists for the press conference.
“I’ve been illegally detained yet again. Since two days, J&K admin has refused to allow me to visit @parawahid’s family in Pulwama. BJP Ministers & their puppets are allowed to move around in every corner of Kashmir but security is a problem only in my case,” Mehbooba tweeted earlier.
She said her daughter had also been put under the house arrest.
“Their cruelty knows no bounds. Waheed was arrested on baseless charges & I am not allowed to even console his family. Even my daughter Iltija has been placed under house arrest because she also wanted to visit Waheed’s family,” Mufti said on Twitter.
Mufti claimed in a tweet that police “barred” media personnel from entering her residence in Srinagar. “Press has been barred from entering my residence in Srinagar. This despite no written orders explaining my arbitrary detention. Kashmir is an open-air prison where no one has the right to express their opinion,” tweeted Mehbooba Mufti.
She claimed that police denied a press conference at her residence and added that Kashmir has become an “open air prison”. She said police in Srinagar stopped journalists from entering her residence for a press conference scheduled at 3 pm.
“We are one day away from DDC polling and its evident that the admin here is using fear and intimidation in tandem to muffle any form of opposition,” she added.
The former Chief Minister said she was not allowed for the last two days to meet the family of the party’s youth leader Waheed Parra who was arrested by the NIA.
Mehbooba said Parra was arrested on “baseless charges”.
The J&K police, however, said that Mehbooba Mufti was only stopped to go to Pulwama for security reasons. They also clarified that the PDP chief “is not under house arrest” and was only requested to postpone her visit to Pulwama.
According to a report in Tribune, Mufti had sought security clearance for her visit to the residence of Parra at Naira village on Friday to meet his family. In a communication posted by Mufti on her official twitter handle, Additional Director General of Police and Director Special Security Group (SSG) SD Singh sought rescheduling of the proposed visit of the former Chief Minister to the Naira village on the demand of the Pulwama district police.
The Pulwama Police sought the rescheduling of her programme citing that neither an anti-sabotage check nor a proper route sanitisation had been done as the entire manpower was committed for other election related operation duties, the report said.
Meanwhile, reacting to the alleged detention, National Conference (NC) vice-president Omar Abdullah said personal liberty was being treated as a favour by the government that gave and withdrew it at will, with no interference from the judiciary.
Omar Abdullah accused the Jammu and Kashmir Administration of treating personal liberty as a favour.
“Parking a truck in front of our gates is now Standard Operating Procedure for this administration. They did the same to my father recently to stop him from praying. Personal liberty is treated as a favour by the govt, to give & withdraw at will, with no interference from the judiciary,” Omar Abdullah tweeted. Kashmir Times

Is plebiscite in Kashmir workable?