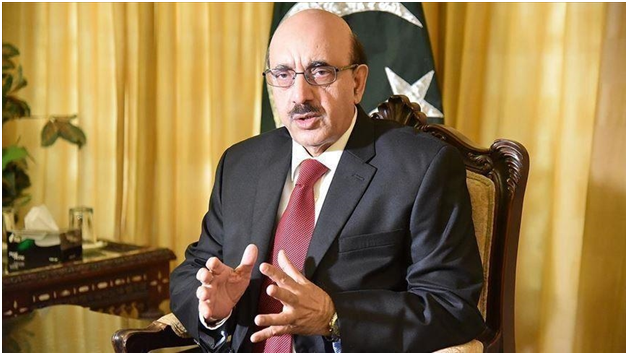 Islamabad: The president of Pakistan-administered Jammu and Kashmir, also known as Azad Kashmir, has appealed to the Organization of Islamic Cooperation (OIC) and the African Union to intervene and stop what he called the ongoing genocide and apartheid regime in Indian-administered Kashmir.

In a statement, Sardar Masood Khan urged the OIC leadership and African Union to stop the alleged settler-colonialism in Indian-administered Jammu and Kashmir.

Speaking to local media, Khan thanked Niger, the founding member of the OIC contact group on Jammu and Kashmir, for consistently supporting the Kashmiri people’s right to self-determination.

The contact group, he said, was established on the watch of then-OIC Secretary-General Hamid Algabid — also prime minister and foreign secretary of Niger.

“The people of Jammu and Kashmir are grateful to the people and government of Niger for their forthright stand on Kashmir,” Khan said.

He added that over the last century, scores of African countries attained freedom from colonialism and joined the UN after arduous independence struggles.

“In the past quarter of the year, more than 2 million Hindus from India have been transferred and illegally settled in the occupied territory to change the demographic composition of the occupied state. This is unacceptable to the people of Jammu and Kashmir and this constitutes a violation of the UN Security Council resolutions on Kashmir, as well as international law,” said Khan.

The president of Azad Kashmir said Pakistan and Niger had enjoyed close ties and worked with each other bilaterally, as well as in multilateral forums.

Khan hoped that Niger would use its influence within the OIC and the African Union to seek justice for the people of Jammu and Kashmir.

Kashmir is held by India and Pakistan in parts but claimed by both in full. A small sliver of the region is also controlled by China.

Some groups in Indian-administered Kashmir have been fighting against Indian rule for independence, or unification with neighboring Pakistan. Anadolu Agency