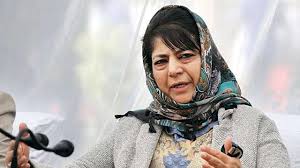 Srinagar: Peoples Democratic Party President Mehbooba Mufti while asserting that iron fist policy of Modi government is bound to prove counterproductive, has said that resolution of the Kashmir dispute is imperative for steering Jammu and Kashmir out of present turmoil and ensure lasting peace and development in the region.

Ex IIOJK Chief Minister Mehbooba Mufti while addressing party workers during her visit to Rajouri and Poonch districts said, “Peace has to be restored on the border, the daily rush to Kashmir graveyards has to end, the bloodshed of our youngsters has to stop and for all this resolution of Kashmir issue is essential”.

She said that Kashmir issue was neither religious nor law and order problem as projected by the ruling Bhartiya Janata Party but it is completely political with its origin in a series of betrayals with people of Jammu and Kashmir. She advocated dialogue with Pakistan and internal stakeholders, especially youth.

Terming August 5, 2019 as the darkest day in Indian history, the former Chief Minister said that Indian government will have to restore the special status of Jammu and Kashmir with all its safeguards.

Hindutva leaders call for ‘economic boycott’ of Muslims in India

Judge Abdel Salam: millions were waiting to be led toward...