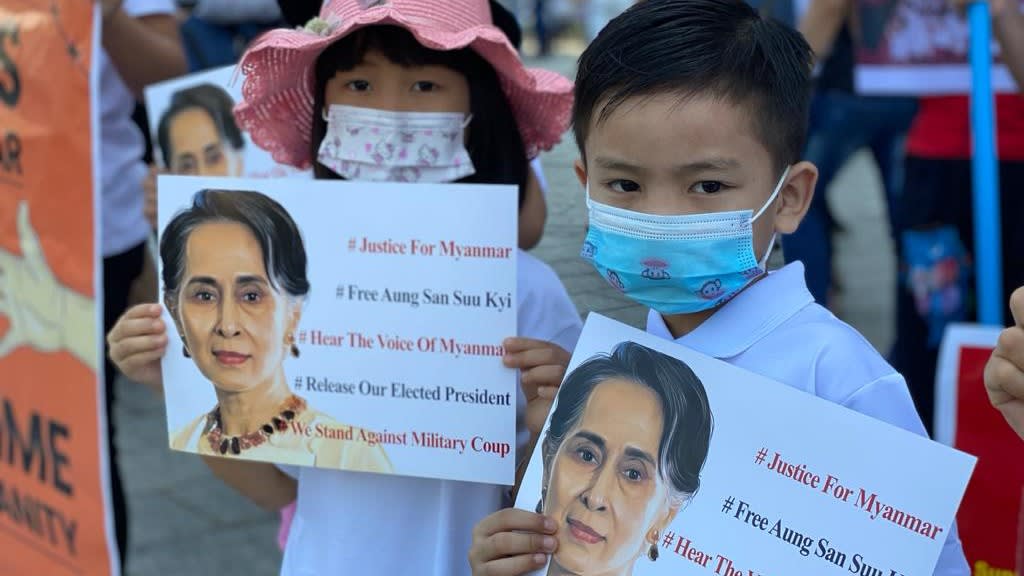 The Suu Kyi-led National League for Democracy had won a landslide in a general election last November. But the military has claimed the election was marred by fraud.

4:00 p.m. Peaceful protests continue in Yangon. Hledan district, the commercial hub of the city, is becoming the main place to protest. People gather on street corners and chant for the release of Aung San Suu Kyi.

A crowd of protesters call for the end of military rule, in Yangon on Feb. 13.

A protester waves the flag of the National League for Democracy, in Yangon on Feb. 13.

12:30 p.m. Many people in Myanmar are now tweeting: ‘STOP NIGHT ARRESTS.’ Rumors are circulating that the police are arresting citizens at night without proper legal procedures, targeting civil servants who are taking part in the boycott against the military.

Most of the shops in the Junction Square shopping mall in Yangon remain closed on Feb. 13.

A promotion site of Chinese carmaker Soueast sits empty due to intensifying protests in Yangon on Feb. 13.

3:50 a.m. The Bank of Japan, like most central banks around the world, is watching carefully to see how Myanmar’s coup may affect bilateral and regional cooperation on monetary policy and financial stability.

As news of the military takeover reached the halls of the BOJ, staff raced to gather information about the ongoing developments, including the fate of the Southeast Asian nation’s central bank governor.

The shocking news was passed up the command chain at the head office in Tokyo’s Nihonbashi district.

“It shows that the international community will speak strongly and with a strong voice, calling for the reversal of the events we’ve seen in Myanmar, and for the full respect of the democratic will of the people of Myanmar as well as full respect of their human rights,” Stephane Dujarric says.

11:00 p.m. The resolution adopted at the U.N. Human Rights Council does not use the word “coup” to describe the military takeover of power in Myanmar, according to the draft version.

Instead, it expresses “deep concern at the declaration of the state of emergency imposed in Myanmar by the military” and “calls for the restoration of the democratically elected Government,” according to the draft.

A final version of the text has yet to be released.

Ambassador Myint Thu, the permanent representative of Myanmar to the United Nations Office at Geneva, speaks on Feb. 12 at a special session of the U.N. Human Rights Council (Screenshot from of U.N. TV)

10:20 p.m. The U.N. Human Rights Council session has ended. The resolution was adopted without vote, but China, Russia, the Philippines and other members later disassociated themselves from the consensus, saying the situation in Myanmar is an internal matter.

10:00 p.m. The United Nations Human Rights Council in Geneva has adopted a resolution on the deteriorating human rights situation in Myanmar proposed by Britain and the European Union.

U.K. Ambassador Julian Braithwaite says the coup “has to be reversed.” He also calls for the release of detained political leaders and activists.

Myanmar’s ambassador says such country-specific resolutions are “not acceptable.”

Friday’s special session follows a move by the administration of U.S. President Joe Biden to “reengage immediately and robustly” with the U.N. Human Rights Council. Biden’s predecessor Donald Trump distanced the U.S. from the council.

Earlier in the session, Mark Cassayre, the U.S. deputy chief of mission to the U.N. in Geneva, reiterates American condemnation of the coup and calls for the “immediate restoration of the country’s democratic institutions.”

The U.S. urges other council members to “join us in promoting accountability for those responsible for the coup, including through target sanctions,” Cassayre says.

Also earlier in the session, Ambassador Myint Thu of Myanmar says the military was “compelled to take the state responsibility” in response to “post-election irregularities and following complex situation,” echoing the junta’s stated justification for the coup.

9:00 p.m. Pro-democracy demonstrators in Thailand and Myanmar are pooling ideas as they protest against their respective governments, including statements of defiance like the three-finger salute inspired by The Hunger Games films, Nikkei Asia reports from Bangkok.

“Abolish 112,” Thai protesters yelled on Wednesday as they clanged metal pots and clattered everything from ladles to chopsticks, echoing recent expressions of discontent in Myanmar. The Thai protesters want to strike down Article 112 of the criminal code — the controversial law of lese-majeste.

Myanmar has inspired pot-banging in Thailand. The three-finger salute Myanmar’s protesters have taken up was first seen in Thailand in 2010 at Red Shirt rallies.

The Hunger Games film series dates from 2008, and portrays characters battling a totalitarian regime. Myanmar demonstrators have added a red ribbon to their version, the color of Aung San Suu Kyi’s ousted ruling party, the National League for Democracy.

5:50 p.m. The U.S. calls on other member states of the United Nations to join it and other countries in pressuring Myanmar’s coup leaders, including through targeted sanctions such as those Washington imposed. Mark Cassayre, charge d’affaires at the U.S. mission to the U.N. in Geneva, asked that they “join us in promoting accountability for those responsible for the coup, including through targeted sanctions.”