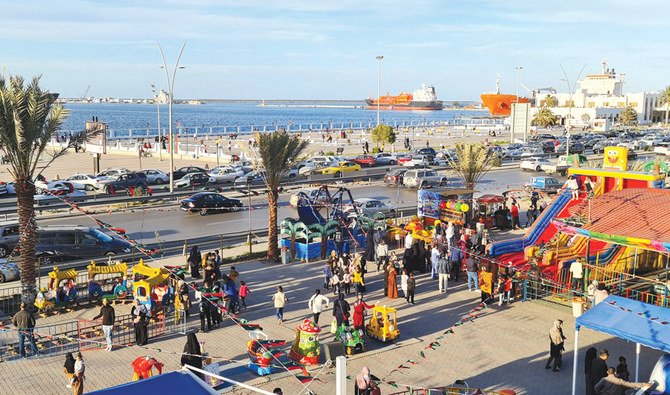 Benghazi: Libya’s eastern strongman Khalifa Haftar has offered his backing for a peace process that seeks to end a decade of chaos, after meeting the head of a new transitional presidential council.

The military commander met with Mohammed Younes Menfi, a former diplomat who also comes from eastern Libya, and who was selected last week in a UN-backed process to head the three-member presidency council.

Haftar offered “the support of the armed forces for the peace process, to defend democracy and the peaceful transfer of power,” a statement from his office read.

The meeting took place as President Recep Tayyip Erdogan’s spokesperson Ibrahim Kalin said Turkish troops stationed in Libya will remain there as long as a bilateral military agreement between Ankara and Tripoli is active and Libya’s government requests it.

Libya has been torn by civil war since a NATO-backed uprising led to the toppling and killing of Muammar Qaddafi in 2011.

The country has in recent years been split between a Government of National Accord (GNA) in Tripoli, and an eastern-based administration, backed by Haftar.

Erdogan said on Tuesday that Turkey would discuss withdrawing its troops, who Ankara says are providing military training to GNA if other foreign powers are withdrawn first.

Turkish troops stationed in Libya will remain there as long as a bilateral military agreement between Ankara and Tripoli is active and Libya’s government requests it, presidential spokesman Ibrahim Kalin said.

In an interview with state broadcaster TRT Haber, Kalin said Turkish companies would also play an active role in the efforts to rebuild Libya, adding that Ankara would provide support to the newly elected interim government.

Menfi landed at Benina airport in the eastern Libyan port city Benghazi from Greece on Thursday and went straight to meet Haftar at his headquarters at Rajma, some 25 km outside town.

A new interim executive was chosen on Feb. 5 by the Libyan Political Dialogue Forum in Switzerland, comprising 75 participants selected by the UN to represent a broad cross-section of society.

Haftar reiterated a recent pledge of support for the leaders of this new executive authority, who were chosen “so that they can reunite the institutions and lead the country to elections,” Thursday’s statement read.

Haftar’s spokesman Ahmad Al-Mesmari had on Saturday congratulated Menfi and Abdul Hamid Dbeibah, who was selected as interim prime minister, alongside “the Libyan people,” on the outcome of the selection process.

The prime minister of the outgoing GNA, Fayez Al-Sarraj, has wished the new executive “success in their mission.”

The interim authority is mandated to lead Libya through to elections scheduled for December. Arab News