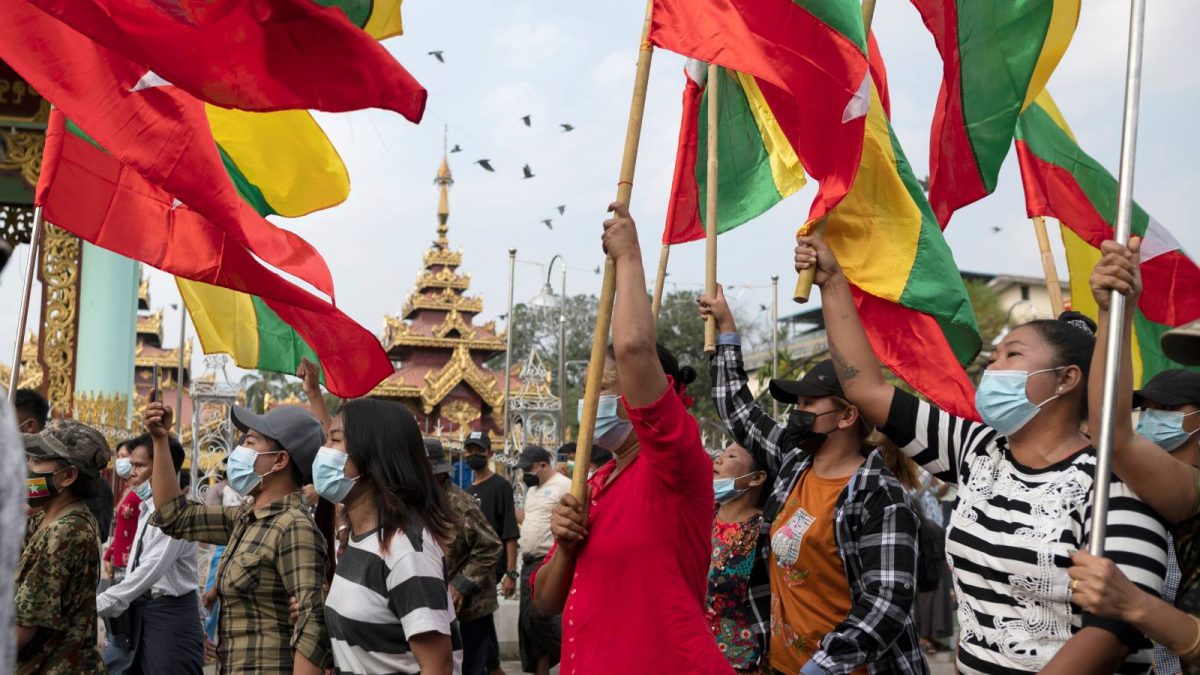 Yangon: Myanmar’s military has detained State Counselor Aung San Suu Kyi and President Win Myint in what appears to be the country’s first military coup since 1988 and the possible end to a decade of civilian rule.

The Suu Kyi-led National League for Democracy, which came to power in 2015, won another landslide victory in the general election last November. The civilian government was moving into its second term, but the military has claimed the election was marred by fraud and demanded an investigation.

4:55 p.m. Myanmar’s military has blocked access to Facebook, as it tightens its grip over social media in the wake of Monday’s coup that put Aung San Suu Kyi in house arrest.

3:45 p.m. Japanese and Thai companies began flocking to Myanmar a decade ago, betting that its tentative embrace of democracy would open up an untapped market. Now the military coup threatens to throw long-nurtured business plans into disarray.

A look here at how the threat of sanctions is making business leaders think twice about investing in the country.

1:00 p.m. The Yangon Stock Exchange’s benchmark falls for the second day in a row as the Myanpix index closes at 408.96, down 2% to a 10-month low. Of the six listed companies, logistics service provider Ever Flow River Group suffered the steepest drop, of 11%.

10:15 a.m. Protesters waved banners and chanted anti-coup slogans in Mandalay during the first street protest against the army’s takeover, posts on social media show. A Facebook video shows about 20 people outside Mandalay Medical University, with one person holding a banner that reads, “People protest against military coup” while the group chants, “Our arrested leaders, release now, release now.”

9:00 a.m. Japan’s Suzuki Motor confirmed that two factories near Yangon that make cars and trucks, which had been shut down since the afternoon of Feb. 1, the first day of the coup, have restarted operations About 400 employees had been on standby at home. Suzuki is the top seller in Myanmar and makes the Swift compact car and small trucks at the plants.

7:31 a.m. Facebook will be blocked until Sunday, the Ministry of Communications and Information says in an online letter. “Currently the people who are troubling the country’s stability … are spreading fake news and misinformation and causing misunderstanding among people by using Facebook,” the letter says. Many Myanmar citizens have been going online to criticize the coup.

Network monitoring group NetBlocks confirms state-owned telco MPT has blocked Facebook, Messenger, Instagram and WhatsApp. Norway’s Telenor Asa says it has complied with the directive, though it “does not believe that the request is based on necessity and proportionality.”

Half of Myanmar’s 53 million people use Facebook, which for many is synonymous with the internet.    © Reuters

“We will do everything we can to mobilize all the key actors and international community to put enough pressure on Myanmar to make sure that this coup fails,” Guterres says in an interview broadcast by The Washington Post. “It is absolutely unacceptable after elections — elections that I believe took place normally — and after a large period of transition.”

8:38 p.m. More than 1,000 doctors in 70 hospitals in Myanmar go on strike to protest the military coup that ousted leader Aung San Suu Kyi two days ago.

5:00 p.m. Myanmar police have filed charges against ousted leader Aung San Suu Kyi for illegally importing communications equipment and she will be detained until Feb. 15 for investigations, Reuters reports.

A police request to a court detailing the accusations against Suu Kyi said walkie-talkie radios had been found in a search of her home in the capital, Naypyitaw. It said the radios were imported illegally and used without permission.

4:00 p.m. Myanpix, the Yangon Stock Exchange’s benchmark index, fell 26.47, or 6%, to 417.25 from its previous close on Jan. 29, the first time since April 2020 the index has fallen below 420. Wednesday’s fall was the largest in percentage terms since March 2017. Trading on the bourse was suspended Monday and Tuesday. Only six companies are listed on the exchange.

2:50 p.m. China’s Foreign Ministry rejects suggestions it supported or gave tacit consent to the military coup. “The Relevant theories are not true. As Myanmar’s friendly neighboring country, we wish that all sides in Myanmar can appropriately resolve their differences, and uphold political and social stability,” spokesman Wang Wenbin said at a daily briefing. During a visit to Myanmar last month, China’s top diplomat met with Myanmar officials, including Senior Gen. Min Aung Hlaing, who seized power in the coup.

1:30 p.m. An NLD lawmaker tells Nikkei Asia that at around 10 a.m. the military ordered the party’s lawmakers to leave their quarters in the capital Naypyitaw within 24 hours. They were not allowed to leave when the coup occurred and a total of 387 people, excluding members of the military-affiliated Union Solidarity and Development Party as well as other people, are currently still there. The lawmakers said they are preparing to move out, adding that the military had given the same order Tuesday to which they answered that they would wait for instructions from the NLD leadership.

Soldiers patrol near the parliament compound in Naypyitaw on Feb. 2.   © Reuters

“We call upon the military to immediately end the state of emergency, restore power to the democratically-elected government, to release all those unjustly detained and to respect human rights and the rule of law. The November election results must be respected and Parliament should be convened at the earliest opportunity,” the ministers say.

12:17 p.m. A protest against the coup is taking place outside the foreign ministry building in Tokyo

There appears to be little the IMF can do to claw back the funds, Reuters says, citing sources familiar with the payments and international finance experts.

10:20 a.m. Japanese Chief Cabinet Secretary Katsunobu Kato tells reporters that events in Myanmar “amount to a coup.” When asked if Japan would continue to provide Myanmar with economic report, he said: “we will consider our response while we keep watching the situation.”

10:00 a.m. Yangon Stock Exchange resumes trading after a two-day suspension. Network connections, which had prevented securities firms and banks from accessing the bourse’s trading and settlement system, have been restored. The military jammed lines of communication early Monday morning as a means to stage a successful coup.

9:49 a.m. Staff at 70 hospitals and medical departments in 30 towns across Myanmar have stopped work to protest against the coup, according to a statement from the Myanmar Civil Disobedience Movement posted on Facebook, Reuters reports.

The statement says the army, by launching a coup, had put its own interests above a vulnerable population facing hardships during the pandemic.

9:43 a.m. Myanmar’s military sets up a State Administrative Council, appointing election commissioners as well as the governor of the central bank.

3:00 a.m. The United Nations Security Council holds a teleconference to discuss the Myanmar coup but stops short of issuing a statement condemning the military’s actions. Talks among Security Council members are said to continue.

12:46 a.m. The U.S. has determined that the military’s seizure of power in Myanmar amounts to a coup, the State Department says, taking a step that will lead to restrictions on American aid to the Southeast Asian nation’s government.

“After a review of all the facts, we have assessed that the Burmese military’s actions on Feb.1, having deposed the duly elected head of government, constituted a military coup d’etat,” a State Department official says in a teleconference.

A senior State Department official adds: “This assessment triggers certain restrictions in foreign assistance to the government of Burma, as it should, and in addition, we will undertake a broader review of our assistance programs to ensure they align with recent events.”

11:55 p.m. U.S. Senator Mitch McConnell, the former Senate majority leader, calls for “even more sanctions” on Myanmar’s military in response to its seizure of power.

“I hope and expect the United States will quickly make the obvious legal determination that this is a military coup and impose significant costs on the military for its attack on democracy,” McConnell says in Congress.

Congress has already given the White House authority to ratchet up sanctions as needed, according to McConnell, who voiced confidence in the stance shown by President Joe Biden and Secretary of State Antony Blinken.

“The new administration deserves credit for approaching this situation in a way that is bipartisan and coordinated with Congress.”

The 10 steps Biden can take to promote peace