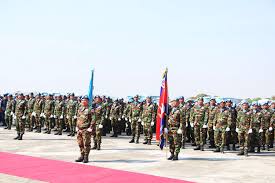 Phnom Penh: A contingent of 92 Cambodian Multi-Role Engineering military service members – including 15 women – has been sent to Lebanon to carry out security missions for the Lebanese people under the authority of the United Nations (UN) according to a spokeswoman for the National Centre for Peacekeeping Forces, Mines and Explosive Remnants of War Clearance (NPMEC).

NPMEC spokeswoman Kosal Malinda told The Post that the engineering troops were a detachment from Platoon 928. They left Phnom Penh International Airport for Lebanon on the evening of January 31 on UN Flight ET8801.

“Upon arrival in Lebanon, they will be given engineering missions similar to the sort of work they have tackled in past deployments such as repairing the Lebanese-Israeli blue barriers and clearing mines and unexploded ordnance along the border between the two countries,” she said.

According to Malinda, these new arrivals have increased the number of Cambodian “Blue Helmet” UN Peacekeepers in Lebanon to 184, including 30 women. In addition to building blue barriers and demining, some of them have also participated in first aid programs assisting soldiers from a number of countries who are all participating in UN missions in the area.

She said that since the global outbreak of Covid-19 and including this latest mission in Lebanon, Cambodia has dispatched military forces to serve as Peacekeepers three times in response to UN requests.

The first occasion was on September 11, 2020, when a total of 218 specialists from Airport Engineering Brigades and Demining Brigades deployed to Mali.

The second instance was on October 25 when 73 Cambodian Multi-Role Engineering specialists were sent to reinforce the Cambodian forces still present in Mali.

Cambodia has sent more than 787 soldiers to serve as UN Peacekeepers on UN missions in Lebanon, Sudan, South Sudan, Mali and the Central African Republic.

Cambodia’s provision of soldiers for “Blue Helmet” missions in conflict zones has made the nation the second-largest ASEAN contributor to UN peacekeeping efforts globally. Phnompenhpost.com