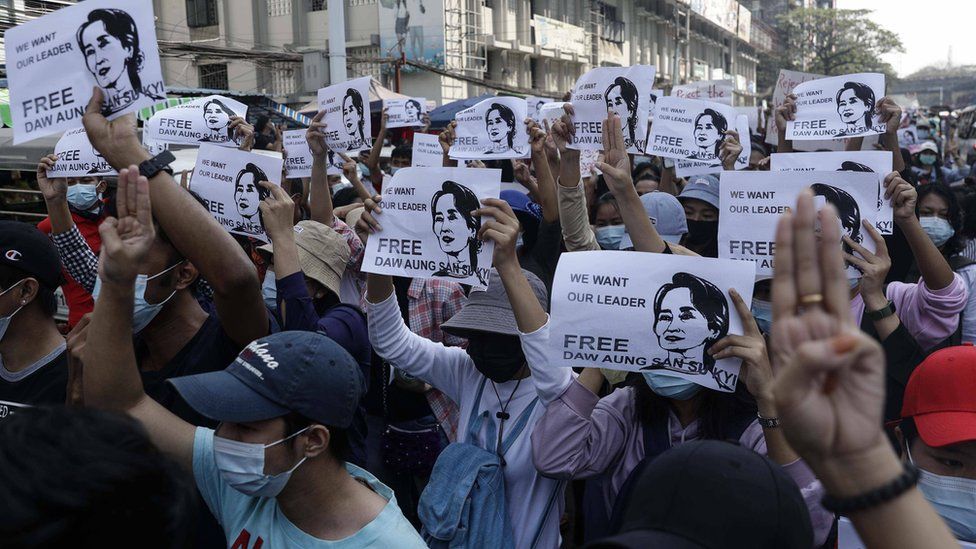 Yangon: Myanmar has seen its largest protests in more than a decade, as tens of thousands of people rallied against the military coup and demanded the release of elected leader Aung San Suu Kyi.

“We don’t want military dictatorship. We want democracy,” the crowds chanted in the main city, Yangon. Rallies were held in more than a dozen other cities.

Internet access has now been restored after a day-long blackout.

The army has not yet commented on the growing opposition to Monday’s coup.

The military seized power after claiming, without evidence, that the November election was fraudulent. The rulers declared a year-long state of emergency and have been hunkered down in the capital, Nay Pyi Daw.

Ms Suu Kyi and senior leaders of her National League for Democracy Party (NLD), including President Win Myint, have been put under house arrest.

In Yangon, people wore red shirts and held red balloons, the colour of Ms Suu Kyi’s party, while cars and buses slowed to sound their horns in support. Many flashed the three-finger salute, a symbol of defiance against authoritarianism in the region.

The internet shutdown imposed by the military failed to curb the protesters. “Respect our vote,” read one banner, in reference to the NLD’s landslide win in November.

Sunday’s protests in Yangon were the biggest since the so-called Saffron Revolution in 2007, when thousands of the country’s monks rose up against the military regime.

Crowds marched towards the Sule Pagoda in the city centre while police vehicles and officers in riot gear were stationed near Yangon University. There were no immediate reports of violence.

“First, we don’t want to go back to military rule. We don’t want to live in fear. Secondly, we want Mother Su to be freed from being under detention unjustly,” a protester told the BBC. “And third, we want to root out the system where soldiers take civilian administrative positions.”

Another demonstrator said that Ms Suu Kyi was “our true leader”, adding: “She is our only hope for our democracy, if she died or something happened to her, what is our future? We really need her back.”

A third said: “This protest is not the end. We’ll group… [every day] until we’re free from the dictatorship.”

In the town of Myawaddy, there were reports of shots being fired, but no immediate reports of any injuries. According to some local media outlets, police had used rubber bullets to break up a rally.

People from all different backgrounds, not just students and activists, have joined the protests in Yangon. They shouted anti-military slogans and sang famous revolutionary songs from the 1988 student uprising against the military regime.

The atmosphere was charged and protesters were defiant. They are angry but also quietly afraid.

They know that the military is capable of using violence to suppress dissent but they feel like they have no choice.

When a group of protesters met a row of soldiers they chanted at them: “You’re trained to be professional soldiers, do not kill civilians.” BBC