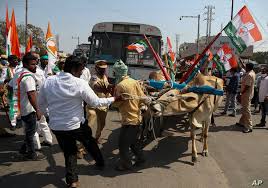 New Delhi: Thousands of Indian farmers blocked highways in the country as they escalated their 10-week-long protest to demand the repeal of three farm laws.

In some places they used tractors and boulders to block roads, in others they chanted slogans and waved flags or squatted along highways for three hours in what is seen as a “symbolic” protest.

Nearly 50,000 security personnel were deployed in the Indian capital, which the government has blocked from the farmers with concrete and steel barriers and concertina wire outside three main sites where protesters have camped since late November.

The protesters had, however, said they will not enforce the road blockade in the capital, which witnessed violence and clashes when some farmers broke through police barricades during a farmers’ rally on January 26.

Although the protests were widely expected to wind down, they gained fresh momentum in recent days with thousands more pouring into protest sites on New Delhi’s borders and vowing not to return until the contentious laws are scrapped.

Hundreds of police, many armed and wearing riot gear, stood by but there was no trouble

The government says the laws at issue will reform Indian agriculture, draw in private investment and improve incomes, but farmers fear they will eventually eliminate state support for crops and dent their livelihoods.

The government defended the laws in parliament on Friday and said that the farmers had been “misled” into believing that the laws would eventually take away their land.  Agriculture Minister Narendra Singh Tomar said he told farmers that the government is prepared to amend the laws “though there is no mistake with them.”  But he did not offer to resume stalled talks.

As the protests continue to spiral, they have garnered international attention. Hours before the road blockades began, the United Nations human rights office called on farmers and Indian authorities to “exercise maximum restraint.”

“The rights to peaceful assembly & expression should be protected both offline & online,” it said on Twitter late Friday. “It’s crucial to find equitable solutions with due respect to #HumanRights for all.”

In a statement Thursday, the U.S. Embassy in New Delhi said that it encourages differences to be resolved through dialogue and described peaceful protests as a “hallmark” of a “thriving democracy.”

“In general, the United States welcomes steps that would improve the efficiency of India’s markets and attract greater private sector investment,” the statement added.

Celebrities such as pop star Rihanna and environment campaigner Greta Thunberg have tweeted their support for the farmers.