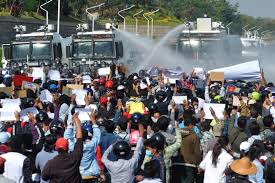 Yangon: Police fired rubber bullets at anti-coup protesters in Myanmar capital’s on Tuesday as demonstrators around the country defied a military ban on rallies and international condemnation of the putsch grew.

Protests erupted for a fourth straight day against last week’s coup to oust civilian leader Aung San Suu Kyi, despite a warning from the new junta that they would take action against demonstrations that threatened “stability”.

“They fired warning shots to the sky two times, then they fired (at protesters) with rubber bullets,” a resident told AFP, adding that he saw some people injured.

An AFP reporter on the ground confirmed that shots had been fired.

The military has banned gatherings of more than five people in Yangon, the nation’s commercial hub, as well as Naypyidaw and other areas across the country where major rallies have erupted, including the second biggest city Mandalay.

A nighttime curfew has also been imposed at the protest hotspot sites.

But on Tuesday, fresh protests emerged in various parts of Yangon, including near the headquarters of Suu Kyi’s National League for Democracy (NLD).

The protesters carried placards including “We want our leader”, in reference to Suu Kyi — who is currently detained by the military — and “No dictatorship”.

In Yangon’s San Chaung township scores of teachers marched on the main road, waving a defiant three-finger salute that has become a signature gesture of the protesters.

“We are not worried about their warning. That’s why we came out today. We cannot accept their excuse of vote fraud. We do not want any military dictatorship,” teacher Thein Win Soe told AFP.

Support for protesting farmers in India gaining momentum in Edmonton

New Zealand suspends ties with Myanmar; to ban visits from...