Support for protesting farmers in India gaining momentum in Edmonton 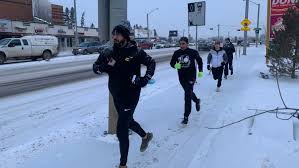 Edmonton: What started as a way for a group of friends in Edmonton to keep motivated and stay in shape during the pandemic has turned into a mission to support the farmers’ protests in India.

Sunny Brar and Kenny Bhullar, both from families of Punjabi descent, have been jogging and training for a marathon-length run together with a group of friends that has grown to more than 50 members.

“We’re out here, trying to raise awareness on the issue,” said Brar whose parents both come from farming backgrounds in the state of Punjab.

Indian farmers have been protesting since August, expressing anger over new agriculture laws that will change the rules around the sale, pricing and storage of crops from the country’s agricultural regions.

Indian Prime Minister Narendra Modi said the changes will make farmers more self-reliant and give them more freedom to set prices and sell their crops to private businesses and corporations.

But farmers, many of whom are Sikhs from nearby Punjab, Haryana and Uttar Pradesh, say the changes will ravage the livelihoods of small farmers, especially, eliminate some of the government supports that regulate prices and allow private companies to exploit the market.

‘This is me running for the farmers’

Brar and Bhullar started a GoFundMe page called Run for Farmers of India in December and committed to running 42 kilometres at the end of January as part of the fundraising effort. They say that between the two of them, they’ve raised about $10,000 and would like to double that.

“What those funds will go towards is providing basic necessities for the farmers at the front lines of the protest, in terms of food, shelter, warm clothing, medical supplies etc.,” said Brar.

Bhullar, who recently completed the 42-kilometre trek from Cameron Heights, through the river valley, to downtown Edmonton and back said when he was running in the frigid temperatures, he told himself, “This is me running for farmers.”

He says seeing elderly farmers marching and sleeping out in the cold in India prompted him to realize training for a marathon in sub-zero temperatures was the least he could do.

“It was a great way to … stay fit but also having the purpose be deeper than just fitness, recognizing we’re doing this for a good cause,” Bhullar said.

Mason Kenny joined the group to train and ran the 42 kilometres with Bhullar and another friend. He said he wasn’t very informed at first but started hearing more talk about the farmers’ protest.

“As I started talking to the other guys in this group, on my own I began doing research, [and] I started realizing what’s going on,” he said.

Months-long protests in India escalated on Tuesday as thousands of farmers clashed with police in New Delhi over new laws that they say will push small farmers out of the market and let private corporations exploit them. 1:47

Sunny Chattha and Harman Kandola host a one-hour radio show every Tuesday that caters to Edmonton’s Indian diaspora called Baaz Weekly on My Radio 580 AM. They said community engagement on the farmers’ protest is unlike anything they’ve ever seen.

“People will pay attention to human rights abuses,” said Chattha, referring to some of the Indian authorities’ attempts to disrupt the protests, such as when they recently cut off internet and phone service.

He admitted when that disruption happened, he was worried about events escalating.

Sunny Chattha, left, and Harman Kandola, right, are co-hosts of Baaz Weekly, a community radio show on My Radio 580 AM. The one-hour program caters to Edmonton’s Indian diaspora and covers current events, including the farmers’ protests. (Min Dhariwal/CBC)

“The third generation who’ve maybe never even been to India understand it from a different lens of social media and injustice, especially with the Black Lives Matter from last summer, they understand injustice, and they can see the equivalency of the injustices going on right now in India.”

Kandola said it’s easy for people to relate with the farmers’ plight, and those who sympathize with their cause see them as a vulnerable group whose livelihood is under attack. Diaspora communities in Vancouver, Ottawa, Toronto and other cities across Canada have come out to raise money and show their support for the farmers.

“I think when it comes to an issue with farmers, a lot of people will resonate that farmers are ultimately protected space,” Kandola said.

Another radio station in Edmonton, Radio Desh Punjab, has been a staple in the community for decades. The walls of the studio are lined with cassette tapes of soundtracks from old Bollywood and Hindi movies, a reflection of the longevity of the station, which has served the community since 1979.

Kulmit Singh Sangha is the longtime host of a call-in show at the station.

He said the events of the last two weeks have people in Edmonton with connections to Punjab stressed out and worried for family who are still there.

“Outrage, heartbroken and also they feel, you know, helpless that they can’t do anything,” said Sangha when describing the sentiment of his many loyal followers, some of whom came to Canada from India more than 50 years ago.

“It makes your blood boil. What’s going on here? What did they do wrong?”.cbc.ca