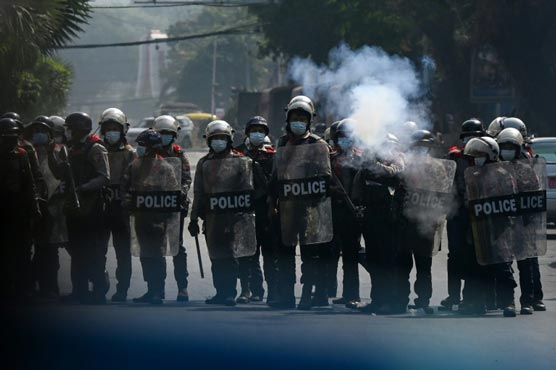 Yangon: Myanmar police fired rubber bullets to disperse protesters in Yangon on Saturday, after the country’s ambassador to the United Nations broke ranks to make an emotional plea for action against the military junta.

The country has been shaken by a wave of pro-democracy protests since a military coup toppled civilian leader Aung San Suu Kyi on February 1.

Authorities have gradually ramped up the use of force to suppress dissent, using tear gas, water cannon and rubber bullets to disperse some protests. Live rounds have been used in isolated cases.

In Myanmar’s biggest city Yangon on Saturday, police used rubber bullets to disperse a demonstration at Myaynigone junction, the site of an hours-long standoff the day before.

“What are the police doing? They are protecting a crazy dictator,” the protesters chanted as they were chased away by the police.

Hundreds of ethnic Mon protesters had gathered there to commemorate Mon National Day, joined by other ethnic minority groups to protest against the coup.

They scattered into smaller residential streets and started building makeshift barricades out of barbed wire and tables to stop the police. Many wore hard hats and gas masks, wielding homemade shields for protection.

At least 15 people were arrested, a police official confirmed.

Local reporters broadcast the chaotic scenes live on Facebook, including the moments when the shots rang out, which AFP reporters on the ground also witnessed.

“We will try to find another way to protest — of course, we are afraid of their crackdown,” said protester Moe Moe, 23, who used a pseudonym.

“We want to fight until we win.”

Three journalists were among those detained — an Associated Press photographer, a video journalist from Myanmar Now, and a photographer from the Myanmar Pressphoto Agency.

– ‘This revolution must win’ –

The crackdown in Yangon came after Myanmar’s ambassador to the United Nations broke ranks and made an emotional plea Friday to the international community.

“We need… the strongest possible action from the international community to immediately end the military coup, to stop oppressing the innocent people, to return the state power to the people, and to restore the democracy,” Kyaw Moe Tun pleaded, his voice cracking with emotion.

Briefly speaking in Burmese, he pleaded with his “brothers and sisters” to keep fighting to end military rule.

“This revolution must win,” he said, flashing at the end the three-finger salute that has become a symbol of resistance against the junta.

His pro-democracy appeal broke from the current rulers of Myanmar — an extremely rare occurrence for a UN representative — and was met with applause in the chamber.

The junta has repeatedly justified its seizure of power by alleging widespread electoral fraud in the November elections, which Suu Kyi’s party had won in a landslide, and promised fresh polls in a year.

Suu Kyi, who has not been publicly seen since she was detained, is now facing two charges for having unregistered walkie-talkies in her residence and breaking coronavirus rules.

While the Nobel laureate is expected to have a hearing on Monday, her lawyer has still not been able to make contact with her.

More than 770 people have been arrested, charged and sentenced since the February 1 putsch, according to the Assistance Association for Political Prisoners monitoring group, with some 680 still behind bars.

But protests have continued apace across Myanmar, from the remote mountain ranges of northern Chin state to the southern coastal city Dawei.-AFP