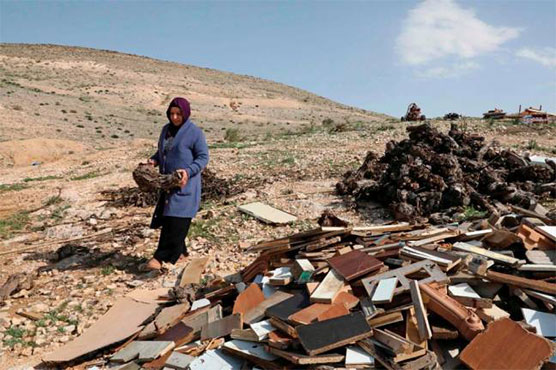 United Nations: The United Nations and European members of the Security Council called on Israel to stop demolitions of Bedouin settlements in the Jordan Valley, and for humanitarian access to the community living in Humsa Al-Baqaia.

In a joint statement at the end of a monthly session of the Security Council on the conflict in the Middle East, Estonia, France, Ireland, Norway and Britain said they were “deeply concerned at the recent repeated demolitions and confiscation of items, including of EU and donor funded structures carried out by Israeli authorities at Humsa Al-Bqaia in the Jordan Valley.”

It said the concern was also focused on the 70 people or so living in the Bedouin community, including 41 children.

Humsah al-Baqia sits in the Jordan Valley, a fertile and strategic patch of land that runs from Lake Tiberias to the Dead Sea, which has emerged as a flashpoint in the struggle over the West Bank.

It is in the West Bank s so-called Area C, occupied Palestinian territory that remains under full Israeli military control.

Under Israeli military law, Palestinians cannot build structures in the area without permits, which are typically refused, and demolitions are common.

The UN envoy for the region, Norwegian Tor Wennesland, also voiced his concerns over the demolitions and land confiscations.

He said Israel security forces had “demolished or confiscated 80 structures” in the Bedouin community “in an Israeli declared firing zone in the Jordan Valley.”

He said that the actions had “displaced 63 people, including 36 children multiple times, and followed a similar demolition in November 2020.”

“I urge Israel to cease the demolition and seizure of Palestinian property throughout the occupied West Bank, including East Jerusalem, and to allow Palestinians to develop their communities,” he said. AFP