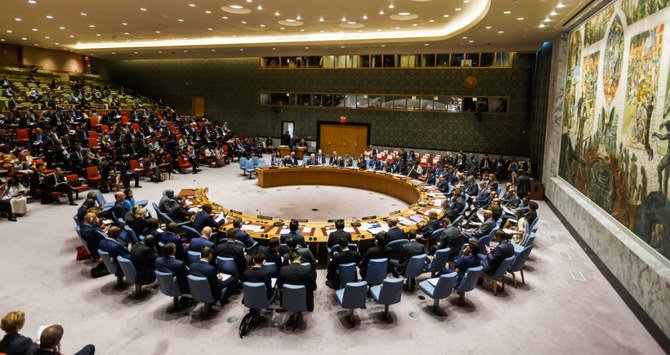 Envoys from the countries planted their flags outside the council chambers on Monday during an installation ceremony that was pared down and streamed online because of COVID-19 precautions.

Securing a seat on the Security Council gives countries a strong voice in matters relating to international peace and security.

Tunisia holds the month-long presidency of the council for a fourth time in January. The nation’s ambassador to the UN, Tarek Ladeb, said that Monday’s ceremony had added symbolism during a pandemic that continues to provoke violence and instability, threatens peace and security, and has left millions facing a dire humanitarian crisis.

He said his country will base its mandate as council president on the principles of multilateralism and global governance. It will spare no effort to “promote consensus and unity in the council in order to enhance its efficiency in maintaining international peace,” and advocate “for a more comprehensive approach to peace and security that takes into consideration different underlying causes of conflict and violence,” he added.

“We will continue to push to end many conflicts which have been on its agenda for a long time, especially the just Palestinian cause,” he said in his opening remarks during the ceremony.

The 15-member Security Council is the most powerful UN body. It has five permanent members — China, France, Russia, the UK and the US — who have the power to veto any vote.

The remaining 10 members are elected by the 193-member UN General Assembly to serve two-year terms. These nonpermanent seats rotate among members of the regional blocs into which member states are traditionally divided for the purposes of voting and representation: Africa, Asia Pacific, Latin America and the Caribbean, each of which gets one vote, and Western Europe, which gets two votes.

India easily secured the uncontested Asia-Pacific seat with 184 votes, guaranteeing an eighth term as a non-permanent member of the council.

Geraldine Byrne Nason, Ireland’s ambassador to the UN, said: “This is a moment we will never forget. We are here to make a difference, not up the numbers.”

Her country “is coming to the table with hope and expectations,” she said, highlighting the plight of people in the war-ravaged nations of Syria and Yemen, and calling on the council to meet its responsibility “not only to alleviate but to resolve conflict.”

She added: “We rely on each other for shelter. People need each other. That’s the Irish spirit we will bring to the Security Council. I wish we all remember the hopes of others for a safe and peaceful future — and that rests with us. I certainly will.”

The battle between Ireland, Norway and Canada for Security Council seats was closely contested. As part of the campaigning, Ireland invited UN diplomats to a concert by Irish rock band U2, while Canada tried to win them over with tickets to a show by Celine Dion.

Ireland was elected, despite being a “small island nation,” in recognition of its unbroken record of participation in some of the UN’s toughest peacekeeping missions dating back to 1958. More than 600 Irish blue helmets currently are deployed in conflict zones around the world, including Syria.

Norway was elected as the second new member from Western Europe chiefly for the instrumental role it has played over the past three decades in brokering peace deals in some of the world’s most bitter conflicts, beginning with the Oslo Accords between Israel and the Palestine Liberation Organization in the 1990s.

Norway is also one the world’s most generous foreign-aid donors, giving a little over 1 percent of its gross domestic profit to help developing countries. Canada gives about 0.26 percent. Other obstacles to the Canadian bid included the fact that it has spent more time as an elected member than the other two candidates, and its record of consistently voting in support of Israel, which alienated many nations.

Mona Juul, Norway’s permanent representative to the UN, highlighted the uncertainty that currently exists in a “world in transition” where “more, not less, international cooperation (is needed) to ensure peace (and) uphold human rights.”

She also reminded the audience that the Security Council has “a real impact on the lives of the people the UN serves” and must ensure that it is “protecting people from the sufferings of war and armed conflicts, particularly children’s rights.”

Juul called on council members to uphold the principles of peace, reconciliation and building bridges to tackle conflicts. She also evoked the symbolism of the horseshoe-shaped table that was presented as a gift by Norway in 1952, and around which members of the Security Council have gathered ever since.

“The table reflects our values of meeting each other face to face and the importance of equality and dialogue between nations,” she said.

Kazakhstan’s envoy, whose country instituted the tradition of installing the flags of new members during a special ceremony, welcomed the latest newcomers with three simple wishes: “Stay safe, stay focused and stay together.” Arab News