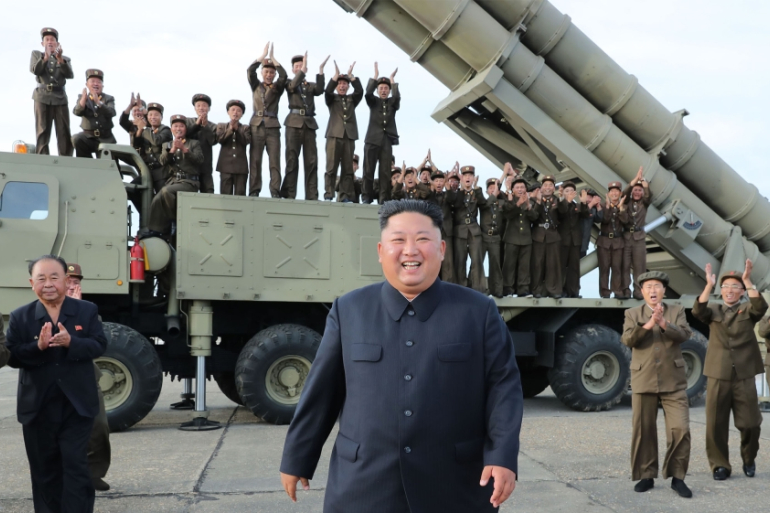 North Korea may be willing to resume working-level talks with the United States on denuclearization and peace issues, according to a Sept. 9 statement from North Korean Vice Foreign Minister Choe Son Hui. The new offer was conditioned on a readiness by the Trump administration to adjust its negotiating stance, which North Korea has blamed for the long-delayed negotiations.

Choe Son Hui, North Korea’s vice foreign minister (second from right), arrives for talks with U.S. officials one day before the June 12, 2019, summit between the United States and North Korea in Singapore. Choe recently expressed interest in resuming working-level talks. We have willingness to sit with the U.S. side for comprehensive discussions of the issues we have so far taken up at the time and place to be agreed late in September,” Choe said. But she cautioned that if the U.S. side offers no new “calculation,” then “DPRK-U.S. dealings may come to an end.”

“Since [the] summit meeting in Singapore, the president has maintained a strong and focused commitment to the search for a lasting peace on the Korean peninsula. He refuses to accept that 66 years after the end of fighting in the Korean War, we have yet to find a successful path to transforming relations and establishing a permanent peace,” Biegun said in a Sept. 6 speech at the University of Michigan. “The president has also been clear that doing so will require the daunting task of eliminating the growing threat of weapons of mass destruction on the Korean peninsula.”

North Korea’s apparent willingness to resume talks follows an exchange of letters between Trump and North Korean leader Kim Jong Un and the Sept. 10 departure of John Bolton as Trump’s national security adviser. While in the White House, Bolton advocated for dramatic denuclearization actions by North Korea before making any U.S. concessions. After his resignation, he forecast that the negotiations with North Korea were “doomed to failure.”

The remarks highlighted one area of disagreement between Bolton and Trump.

“I think John really should take a look at how badly they’ve done in the past, and maybe a new method would be very good,” Trump said Sept. 20 in answer to a question about Bolton views.

“I welcome President Trump’s wise political decision to approach the DPRK-U.S. relations from a more practical point of view,” he said, describing Bolton as a “burdensome troublemaker, who handled everything sticking to an outdated framework.”

If they take place, U.S.-North Korean talks would mark the first substantive exchange of views and proposals since the failed February 2019 summit in Hanoi between Trump and Kim. That meeting followed their first summit in Singapore in July 2018, when the two leaders agreed to a joint declaration to work toward denuclearization and a peace regime. (See ACT, July/August 2018.) Following the Singapore meeting, North Korea has not flight-tested any long-range ballistic missiles or conducted any nuclear explosions, and Trump has abided by his pledge to scale back joint U.S.-South Korean military exercises.

Democratic members of Congress have sharply criticized Trump’s lack of urgency to reach an agreement to halt North Korea’s nuclear program, as well as his willingness to ignore several North Korean flight tests of short- and medium-range ballistic missiles, which violate UN resolutions.

In a Sept. 6 letter to the White House, the eight highest-ranking Democrats in the U.S. Senate urged Trump “to recognize that North Korea’s series of ballistic missile tests clearly contravene United Nations Security Council resolutions and are being used to advance their operational capabilities to deliver nuclear weapons.”

The senators urged Trump “to undertake a more pragmatic, verifiable approach to pursue denuclearization” of the Korean peninsula.

In his Sept. 6 address, Biegun appeared to call for faster action and acknowledged North Korea’s ongoing efforts to improve its nuclear capabilities.

“We are aware that this diplomatic opening is fragile. We fully understand the consequences if diplomacy fails, and we are clear-eyed about the dangerous reality of ongoing development by North Korea of weapons of mass destruction and the means to deliver them across the region and the world,” he said.

Biegun also outlined the Trump administration’s overall vision for the talks and indicated that the United States recognizes that progress is possible through reciprocal actions that help advance the goals set out by the two leaders in Singapore in 2018.

“Through direct engagement, we must create space and momentum for diplomacy,” Biegun said. “Once we begin intensive negotiations, we can directly discuss actions that each side can take to create more and better choices for our leaders to consider. Neither the United States nor North Korea has to accept all the risk of moving forward.”armscontrol.org