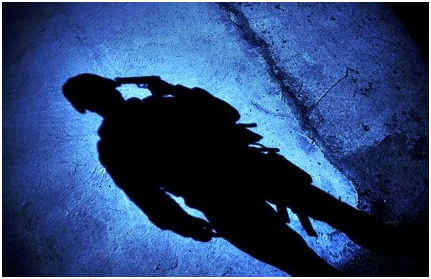 Jammu: An Indian Army soldier allegedly shot himself last week with his service rifle at a forward post near the Line of Control (Loc) in Poonch district of Jammu and Kashmir, said, officials.

Havaldar Rajinder Kumar was on duty when he reportedly shot himself with his rifle at his post in the Salootri area around 8.25 am (November 22, 2020) the officials said.

He was rushed to the hospital, where he succumbed to injuries at around 10.05 am, they said, adding the motive behind his taking such an extreme step was not known immediately.

The man holding a havaldar’s rank belonged to the Indian Army’s 39 Rashtriya Rifles regiment and was stationed at the Nambal post in Salotri village.

Police have started inquest proceedings to investigate the incident, the officials said.

A court of inquiry has also been initiated, a defence spokesperson said.’’

Earlier, in Sopore, an Indian soldier of Centre Reserve Police Force (CRPF) allegedly committed suicide by shooting himself with his service rifle in Wadoora area of Sopore in north Kashmir’s Baramulla district on Wednesday morning November 18, 2020.

Officials told the news agency—Kashmir News Observer (KNO) that a 42 Soldier Head Constable identified as GD Rajan Kumar of Chatiana Odisha shot himself dead while he was on duty at 92 BN CRPF Headquarter Wadoora.

Soon after the incident, his colleagues rushed to the spot and found him lying in a pool of blood, they said.

A police officer also confirmed the incident to KNO and said a case has been registered in this regard and further investigation has been taken up.

The officer said it was not immediately known what forced the soldier to take the extreme step.

On August 21, an Indian soldier posted on the forward post of Line of Control in Krishna Ghati sector of Jammu and Kashmir’s Poonch sector was found dead under mysterious conditions on August 21, 2020, officials said.

They said that preliminary investigations reveal that the soldier has committed suicide but things will be clear only when postmortem will be done.

Officials told news agency—Kashmir News Observer (KNO) that a soldier posted with the army’s RR who was deployed at a forward post along the Loc in Krishna Ghati sector in J&K’s Poonch district, was found dead.

“The soldier was found dead mysteriously today morning. Investigations have been started to found the cause of death. Initial probe reveals that he has committed suicide but things will be clear once postmortem will be done,” the officials said. They said that a police team has rushed to the spot and a case has been registered.

Amid Covid-19 pandemic, suicide and fratricidal incidents among Indian security forces especially paramilitary CRPF men have shown an upward trend in the Valley with ban on availing leave to go home and meet families being cited one of the major reasons for suicidal tendencies among forces personnel.

In July 2020, a CRPF personnel committed suicide by shooting himself dead with his service rifle at his unit in Pantha Chowk area of Srinagar. “An inquiry has been ordered to find out the reason that led him to take this extreme step,” a CRPF official said. Today’s incident came just three days after a CRPF man posted at a hotel in the Dalgate area of Srinagar accidentally shot himself with his service rifle. He was critically injured and is battling for life at Army’s 92 base hospital in Srinagar.

On July 6, two Sashastra Seema Bal (SSB) men were killed in a fratricidal incident in a court complex in Kulgam district of south Kashmir. The duo had resorted to an argument before shooting themselves dead with their services riffles. Earlier on May 12, two CRPF personnel committed suicide by shooting themselves with their service rifles in two separate incidents at south Kashmir’s Anantnag district.

The rise in suicide cases among CRPF men has however been directly linked with the prevailing pandemic as it is evident by the suicide notes left by a couple of CRPF men who took the extreme steps. A suicide note of one of the CRPF men who shot himself dead read: “I am afraid, I may be Corona positive…. Better to die.”

A senior CRPF official told KNO that every incident is followed by an internal inquiry but one of the main reasons why “boys are taking extreme steps” is that they are not able to go on leave and meet their families. “Back home, their families are worried too, which increases mental pressure for the boys on duty in Kashmir, which is a challenging place. Even though regular counseling sessions are being given to the CRPF men in the morning and evening, still the level of pressure on their minds remains due to coronavirus outbreak,” he said.

Special Director General of CRPF Zulfikar Hassan said that every suicide case in the CRPF ranks has a different reason. “Remaining away from the families may be one of the reasons. Jawans haven’t been able to avail of the leave facility since March. So it’s been over four months, they haven’t seen their families. We have taken steps to prevent such incidents among our men,” he told KNO.

Asked whether the number of incidents is more this year so far compared to last year, the top CRPF officer said that the numbers are far less than last year. “Every incident is followed by an inquiry and accordingly measures are taken,” he said.

They said a CRPF jawan, identified as Ishwarappa, a resident of Karnataka, was critically injured when he allegedly shot himself with his service rifle at a camp in Pahalgam. “The injured was immediately taken to a hospital where he was declared brought dead,” they said.

Sepoy Prince Kumar (25), a resident of Hoshiarpur in Punjab, was posted in the 112 Territorial Army and was on guard duty when he killed himself at Chinar camp in the Rehambal area, a police official said.

The official said that the motive behind the extreme step was not known immediately.

Indian media reports that from 2009 to 2013, 597 armed forces personnel committed suicide–498 from the Army, 83 from the Air Force and 16 from the Navy, Defence Minister Arun Jaitley said in a written reply.

The highest number of suicides took place in the Army in 2010 when 116 troops committed suicide but the number came down to 86 in 2013, according to the figures given by the minister in his reply.

In 2018, a total of 80 army personnel committed suicide. The total number of suicides in the Air Force was 16 while in the Navy was 8, Minister of State (MoS) for Defence Subhash Bhamre told the Rajya Sabha in a written reply last week.

Another data tabled in parliament shows that between 2011 and 2018, there were 891 deaths by suicide of members of the Indian armed forces (Army, Air Force and Navy).

Suicides were highest in the Army, which reported that 707 personnel took their own lives between 2011 and 2018. The Air Force reported nearly 5 times fewer suicides at 148 over the eight years. The Navy has the lowest number of suicides, with 36 deaths reported over the same period.

There was a spike in suicides in the Army in 2011, when 105 deaths were reported. The next highest suicides were in 2016, with 104 deaths. Last year, there were 80 deaths by suicide in the Army.