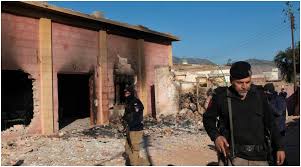 Islamabad: Pakistan’s Supreme Court ordered the Evacuee Property Trust Board (EPTB) to start reconstruction of a century-old Hindu temple that was vandalised and set on fire by a mob in Khyber Pakhtunkhwa province last week, saying the attack has caused “international embarrassment” to the country.

The apex court, which took notice of the attack and ordered the local authorities to appear before the court on January 5, also directed the board to submit in court details of all functional and non-functional temples and gurdwaras across Pakistan.

During the hearing, a three-member bench headed by Chief Justice Gulzar Ahmed also directed the EPTB to clear encroachments from temples across the country and take action against officials involved in the encroachments.

The EPTB is a statutory board that manages religious properties and shrines of Hindus and Sikhs who had migrated to India following the partition.

Khyber Pakhtunkhwa chief secretary, police chief, and Dr Shoaib Suddle, the head of a commission on minorities’ rights, were also present during the hearing.

Dr Suddle, who visited the temple in Karak district and presented a comprehensive report in the case to the Supreme Court after it asked the one-man commission on the rights of minorities to probe the attack, told the court that the provincial EPTB “did not protect the shrine”.

The police chief told the court that a protest by the Jamiat Ulema-i-Islam-Fazl (JUI-F) was going on near the site on the day of the incident which was sponsored by Maulana Faizullah.

“Out of the six ulema at the protest, only Maulvi Mohammad Sharif incited the crowd,” the police chief said.

Chief Justice Ahmed said that “suspension was not enough”.

The judge also slammed the EPTB chairman, saying he should “not sit on the chairman’s seat with government mentality”.

“Your employees are doing business on the land meant for shrines. Arrest them and start the reconstruction of the temple,” Justice Ahmed directed.

“Money should be taken from Maulvi Sharif for reconstruction of the shrine,” the chief justice remarked.

Justice Ahsan observed that the EPTB “has the money to construct its own buildings but does not have money for Hindus”.

The bench directed that details of functional and non-functional shrines, records of disputes on EPTB lands and a report on the performance of the EPTB chairman be submitted to the court in two weeks. It also directed the KP branch of the EPTB to hold discussions with the provincial minorities commission, the paper said.

The apex court said a detailed judgement would be released later and adjourned the hearing for two weeks.

The temple was attacked by the mob after members of the Hindu community received permission from local authorities to renovate its decades-old building, according to witnesses.

The mob had demolished the newly constructed work alongside the old structure.

Leader of Hindu Community Peshawar Haroon Sarab Diyal said that a samadhi of a Hindu religious leader exists at the temple site and Hindu families from across the country do visit the samadhi on every Thursday.

The Samadhi of Shri Paramhans Ji Maharaj is considered sacred by the Hindu community. It was built where he died in 1919 in Teri village of Karak.

The controversy over the samadhi erupted many decades ago.

According to the details submitted to the Supreme Court in 2014 in a case about it, the Hindus had been visiting the shrine till 1997 when it was dismantled by the locals.

The apex court in 2014 ordered the Khyber Pakhtunkhwa government to restore and reconstruct the Hindu shrine.

The order was issued over a petition of a Hindu lawmaker who had claimed that the shrine had been occupied by an influential cleric of the area.

According to official estimates, 75 lakh Hindus live in Pakistan. However, according to the community, over 90 lakh Hindus are living in the country. The Hindu

Algeria could face US sanctions over military technology ambitions