Subscribe Us
HomeInformationParveena Ahangar, a story of courage from Kashmir
Information, NGO 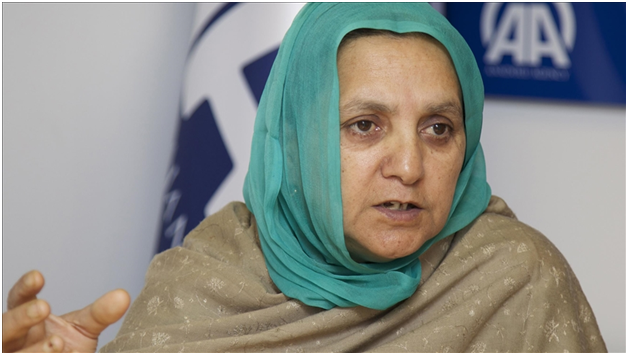 Several weeks ago authorities in Indian-administered Kashmir raided the home and offices of Parveena Ahangar, a local human rights defender, over alleged “terrorist funding,” sending shockwaves in NGOs operating in the region.

The “iron lady of Kashmir” said that in 30 years of activism, the Oct. 28 raid by the Indian National Investigation Agency was the first time such brazen action was taken against her, calling it “saddening.”

She said such raids endanger the lives of families of the victims who are longing for justice.

On the eve of International Women Human Rights Defenders Day, observed Sunday, Anadolu Agency spoke with Ahangar, who is chair and founder of the Association of Parents of Disappeared Persons (APDP), a group seeking justice for victims of enforced disappearances in the Indian-administered region.

“For the last three decades, nobody has raised questions on my work and integrity. This is for the first time that the Indian Investigating Agency wants to prove otherwise, but I will not budge what I am committed to before my God,” Ahangar said in her office in Srinagar.

In 2017, the Indian National Investigation Agency started pursuing a case against pro-freedom activists and groups, claiming that they were getting money from undisclosed sources and using it to fund terrorist activities.

Since then, many raids have been carried out across the region.

For 30 years, Ahangar has fought for justice against disappearances in Indian-administered region

I myself am a sufferer

Nominated for the Nobel Peace Prize in 2005 and a recipient of Norway’s Rafto Prize in 2017 for her ground-breaking reports on enforced disappearances, Ahangar has been a victim of state aggression.

Ahangar’s son, Javed Ahmed Ahangar, was abducted Aug. 18, 1990, by the Indian army and consequently disappeared. He was a Class 11 student at the time. Overtaken with grief, she looked long and hard to find him, but to no avail. She took the legal route and filed various petitions, but that did not help.

In 1994, she formed the association of Parents of Disappeared Persons when the government and every other institution failed to deliver justice in her son’s case and other victims.

“I am myself a sufferer. My 18-year-old son who was abducted by the Indian Army in 1990 has not been returned to me, and there are hundreds of mothers who are still waiting for their sons but have not been returned. I’m fighting for the return of our sons,” said Ahangar.

She said for four years she fought the legal battle to find his whereabouts. “I saw hundreds of mothers waiting at the doors of these institutions pleading for the same but the reply used to come ‘untraced’ with no accountability. Where are our sons, I am asking the Indian government.”

According to APDP figures, 8,000-10,000 people in the disputed region have disappeared with no trace.

In an in-depth peer-reviewed study, Lubna Mohiuddin (1997) observed that despite no formal declaration of a state of emergency, the presence of Indian troops in the region shot up from 0.15 million in 1990 to 0.7 million by 1997, which aggravated human rights abuses in the region.

“Despite India being a signatory of multiple international covenants, charters and declarations, violence in Kashmir continues to occur in the form of extra-judicial killings, arbitrary arrests, tortures, burning of houses, and gang-rapes,” the study said.

A year of dissent:

On Aug. 5, 2019, when India scrapped the limited autonomy of the Jammu and Kashmir region, the APDP documented the Kashmir region as going through one of the worst forms of state authoritarianism and high handedness.

“The Indian Government has continuously asserted that ‘normalcy’ has been returned to Kashmir. But, the testimonies and ground level reports indicate the contrary, as there are still severe restrictions and curtailment of basic human rights of the residents of the Kashmir region,” according to the report.

Ahangar says if India thinks “by taking out raids at my home or at my office will stop me from doing what I have been doing for the last 30 years, it will not happen. I have been hardened by the pain and grief after hearing thousands of stories of people who have been trampled under the foot of oppression for so long.

“If I am asking for protection of my and their rights, what wrong I am committing?” she said.

“It is a long battle to go. If I have to stand alone, I will and nothing by the grace of God can deter me from doing that.”

On the tenth of every month, the APDP used to hold a sit-in-protest to demand justice against enforced disappearances but after the abrogation of special status and the current pandemic crisis, it has been suspended. Anadolu Agency

JKNF thanks OIC, Pakistan for their continued support to Kashmir...