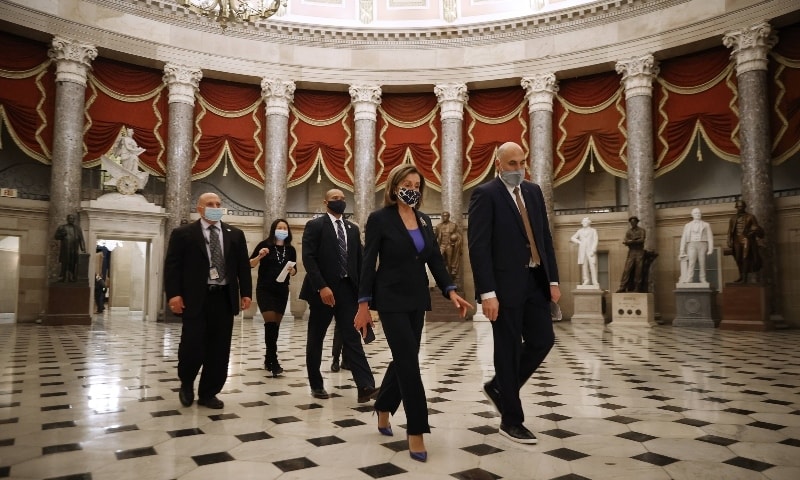 Washington DC: US Vice President Pence has made it clear that he will not invoke the 25th Amendment against President Donald Trump, even though the House of Representatives voted thrice on Tuesday night, asking him to remove his boss.

Impeachment proceedings against the US president will begin on Wednesday at 9am (7pm Pakistan time).

The resolution asking Pence to send Trump home a week before he completes his four-year term was introduced in the House on Tuesday morning, but voting concluded around midnight.

If implemented, the resolution will enable Pence to replace Trump as the acting president for the latter’s alleged role in inciting a mob attack on the Capitol building on Jan 6. Five people, including two police officers, died during the attack which was the first such incident in the country’s history in more than 200 years.

The voting on the resolution that urges Pence to use a legal provision to remove the president began around 7:30pm on Tuesday. Under Section 4 of the 25th Amendment to the US constitution, the vice president can oust the president if he and majority of the cabinet find him unfit to continue.

All three votes were strictly on party basis. During the first procedural vote, 219 Democrats voted for the resolution while 206 Republicans voted against it.

Five Republicans and three Democrats did not vote. The 435-member House is divided between 222 Democrats and 211 Republicans while there are two vacancies.

In the second procedural vote, all 222 Democrats voted for the resolution while 204 Republicans voted against it. Seven Republicans did not vote.

In the final vote, 222 Democrats and one Republican — Adam Kinzinger of Illinois — voted for the resolution and 205 Republicans voted against it. Five Republicans did not participate.

But 12 Republican lawmakers have said that they would vote to impeach the president because he has betrayed his country and its constitution.

“There has never been a greater betrayal by a president of the United States of his office and his oath to the Constitution,” said Congresswoman Liz Cheney, the No 3 Republican in the House and the daughter of the former vice president Dick Cheney.

Also on Tuesday, six House Republicans introduced a resolution to censure Trump over his role in stoking last week’s violent riots, arguing that this was the best move as the impeachment would never get enough votes in the Senate to pass.

But after Pence’s announcement that he was not going to remove Trump, political observers in Washington see these as preventive moves, aimed at stopping Trump from making another irrational move, like the attack on the Congress building.

In a letter to House Speaker Nancy Pelosi just before the first vote, Pence wrote: “I do not believe that such a course of action is in the best interest of our nation or consistent with our constitution.”

He said the 25th Amendment was “not a means of punishment or usurpation,” and that invoking it would “set a terrible precedent”.

Pence, who has been praised by both Republicans and Democrats for refusing to follow his boss’s advice to overturn the results of the 2020 presidential election, assured the nation that the Trump administration was committed to ensuring an orderly transition in its final days and that “now is the time to heal”.

Pence has also promised to attend President-elect Joe Biden’s inauguration on Jan 20, unlike Trump who has opted out.

The resolution that urges Pence to get rid of Trump before the inauguration said the outgoing president “widely advertised and broadly encouraged” the protests that led to last week’s violence.

He also ignored calls to condemn his supporters’ actions swiftly, it adds. It says that Trump repeatedly tried to delegitimise the presidential election results with false claims of widespread voter fraud.

Despite Pence’s refusal, the House is moving forward with impeachment proceedings, making Trump the only US president to be impeached twice.

The move, however, has had little impact on Trump who said at a rally in Texas on Tuesday that “the 25th Amendment is of zero risk to me but will come back to haunt Joe Biden and the Biden administration”.

Earlier on Tuesday, Trump said the impeachment move was “ridiculous” and would “cause tremendous danger to our country and it’s causing tremendous anger”.

Encouraged by Pence’s refusal, House Republicans also lined behind their outgoing leader, and some defended his behavior too, claiming that he never incited the crowd to attack the capitol.

They also argued that Congress had no role telling the vice president what to do.

“The vice president has given you your answer, before you asked the question,” said Dan Bishop, a Republican of North Carolina. “Your ultimatum does violence to a core feature of the architecture of the constitution.”

“They are obsessed with him […]. This is not about impeachment. This is about cancelling the president and all people who disagree with them.” AFP.