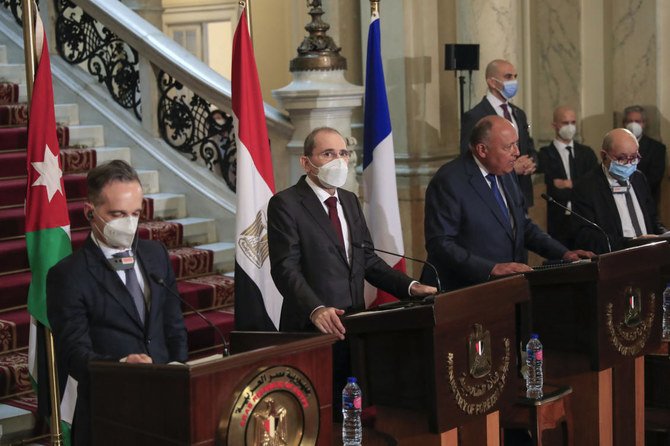 Cairo: Egypt recently hosted the foreign ministers of Germany, France and Jordan to discuss ways to revive peace talks between Israel and the Palestinians, a week before US President-elect Joe Biden takes office.

In Cairo, the country’s Foreign Ministry said the aim of the meeting was to urge the Palestinians and Israelis to negotiate a “just and comprehensive political settlement” on the basis of achieving a Palestinian state with East Jerusalem as its capital on territory Israel captured in the 1967 Six Day War.

The Palestinians suffered numerous setbacks under the outgoing administration of US President Donald Trump and complained about what they say were pro-Israeli steps from Washington.

The Palestinian Authority has boycotted the Trump administration since he recognized Jerusalem as Israel’s capital and moved the US Embassy there from Tel Aviv. Trump has since slashed financial assistance for the Palestinians and reversed course on the alleged illegitimacy of Israeli settlements on land claimed by the Palestinians.

Egypt’s President Abdel-Fattah el-Sissi said last month that Cairo has been working toward a two-state solution to the Israeli-Palestinian conflict, “taking into account the regional and international changes.” He was apparently referring to Biden’s election and the establishment of ties with Israel by four Arab countries — the United Arab Emirates, Bahrain, Sudan and Morocco.

France’s Foreign Ministry said the meeting would discuss ways to have Israelis and Palestinians embark on talks, building on “the positive regional context” related to the recent normalization deals.

“It is a question of contributing, at the same time, to a resumption of dialogue between Israelis and Palestinians, with a view to resolving the conflict in the framework of international law,” the statement said.

Germany’s Foreign Minister Heiko Maas tweeted before leaving for Cairo on Sunday that the ministers would discuss “which concrete steps” could help “build trust” between Israel and the Palestinians.

In September, Palestinian Authority President Mahmoud Abbas called for an international conference early in 2021 to launch a “genuine peace process,” based on the UN resolutions and past agreements with Israel. The Palestinians no longer see the US as an honest broker.

PA Foreign Minister Riyad al-Malki said last month that the Palestinian Authority was ready to cooperate with the incoming Biden administration and urged Israel to return to talks based on a two-state solution for the Israeli-Palestinian conflict.

Also last month, Channel 12 news reported that Sissi told Abbas when they met in Cairo that he intends to broker peace talks between Israel and the Palestinians.

The unsourced report said the talks would be held under the auspices of Egypt, Jordan, France and Germany.

Abbas reportedly said that while he supports the Egyptian initiative, he still intends to push for an international conference that will include the so-called Middle East Quartet (the US, UN, EU and Russia) and has reached out to UN Secretary-General Antonio Guterres on the matter. AP.

Pence refuses but Democrats insist on removing Trump before Biden’s...