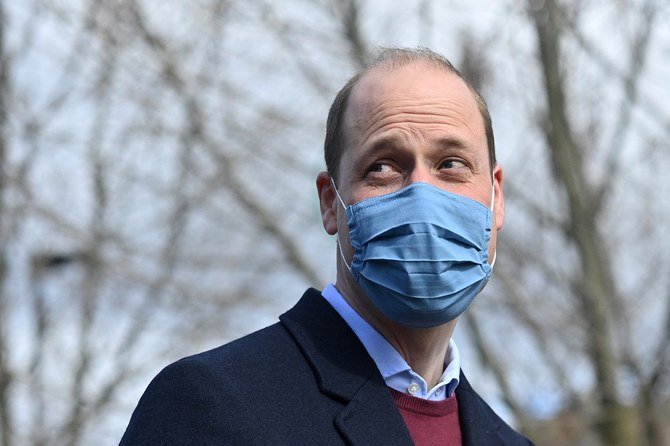 LONDON: Prince William has said that he felt “totally overwhelmed” by the efforts of aid workers in Syria after meeting a group supported by British charity.

The Duke of Cambridge, 38, joined a video call with three Syrian aid workers supported by the Disasters Emergency Committee’s (DEC) Coronavirus Appeal, who described the difference made by UK public donations of $53 million

The aid workers detailed how all six of Syria’s states receiving support faced “potential catastrophe” this year, with “no end in sight” for the crisis after 10 years of conflict.

Fadi Hallisso, 42, from Aleppo, told the duke about his organization called Darna, which — with the support of DEC funds — built toilets and sanitation systems in Syria’s many refugee camps.

“The situation in Syria is very grim,” Hallisso said, describing how Idlib province had swelled with millions of people forced to flee from other areas.

“It is overpopulated, overcrowded,” he said. “Only 65 percent of the hospitals are still functioning.

“The infrastructure is not able to serve all of these people. Many hundreds of thousands of fellow Syrians are living outdoors in makeshift tents.

“The economic situation is also deteriorating very fast. The deflation of the Syrian pound is reducing the purchase power of every Syrian.

“On top of that came the pandemic. People are often left with one of two choices, either to die of hunger if they stay at home, or to risk their lives if they go out and try to work and bring food to their families.”

The duke said he was “amazed” by the £38 million that had been raised by Britons.

“I’m not sure the wider British population realises how much has been given,” he said.

The DEC appeal has been used to assist refugees and displaced people in Yemen, Syria, Somalia, South Sudan, the Democratic Republic of Congo and Afghanistan. Arab News

Zarif lifts lid on when Iran may ‘immediately’ start to...