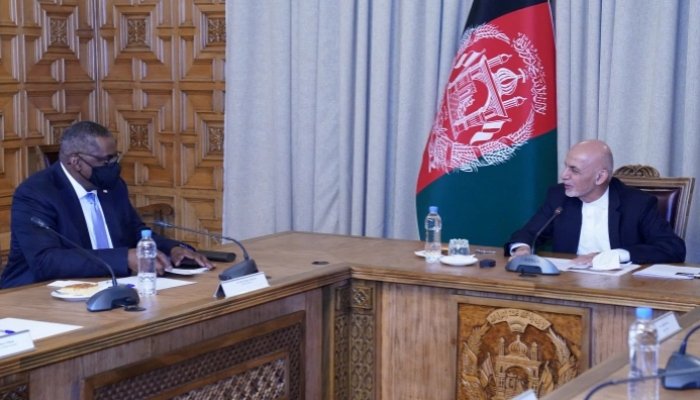 Kabul: US Defence Secretary Lloyd Austin made an unannounced trip to Afghanistan. His visit came just weeks before Washington is due to withdraw the last of its troops under a deal struck with the Taliban.

After talks with President Ashraf Ghani Sunday, Austin would not be drawn for comment on the deadline.

Just weeks before Washington is due to withdraw the last of its troops under a deal struck with the Taliban, US Defence Secretary Lloyd Austin made an unannounced trip to Afghanistan.

New US President Joe Biden said last week the May 1 deadline agreed by predecessor Donald Trump would be “tough” to meet — prompting outrage from Afghan Taliban, who warned that Washington would be “responsible for the consequences”.

The Afghan government is also keen to keep US forces in the country for as long as possible for the vital air cover they provide.

After talks with President Ashraf Ghani Sunday, Austin would not be drawn for comment on the deadline.

“That’s the domain of my boss,” he told reporters.

“That’s the… decision that the President (Biden) will make at some point in time, in terms of how he wants to approach this going forward.”

Under the deal thrashed out between the Taliban and Washington, the group pledged also to engage in peace talks with Afghan government negotiators, but they have made almost no progress and fighting has only worsened — particularly in rural areas.

Major urban centres are also in the grip of a bloody terror campaign in the form of attacks targeting politicians, civil servants, academics, rights activists, and journalists.

Kabul was the last stop on a whirlwind tour of Asia for the new Pentagon chief, a former career soldier who served in Afghanistan as a division commander from September 2003 until August 2005.

Austin and his entourage flew into Afghanistan on a US-liveried aircraft instead of a military plane that usually carries US officials to the war-torn country.

Details of his visit were kept under wraps for security reasons until after he left.

Asked about the Taliban warning that Washington would face consequences if the deadline wasn’t met, Austin said he was sure US forces could cope.

“I have great confidence and in his ability to protect our troops,” said Austin, referring to General Austin Miller, commander of US and NATO forces in Afghanistan.

Austin´s visit comes as the US is desperate to inject fresh impetus into a peace process that has dragged on in Doha since September, with feuding parties unable even to agree on an agenda.

Last week Moscow hosted a gathering of stakeholders in a bid to break the deadlock, but even that ended without any concrete proposals.

An even broader conference is now scheduled to be hosted by Turkey next month.

The US, Russia, and other stakeholders want to see some form of transitional government take power in Afghanistan, but Ghani has insisted leaders can only be chosen at the ballot box.

Having made enormous gains on the battleground, the Taliban appear to have little to gain from either strategy.

Taliban co-founder and deputy leader Mullah Abdul Ghani Baradar told the Moscow conference that Afghans “should be left to decide their own fate”. AFP