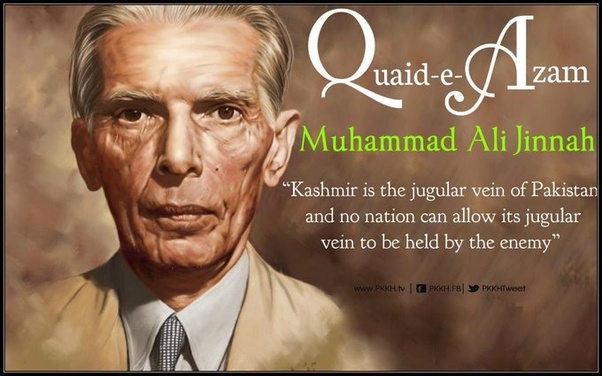 It was always in the mind of Quaid-e-Azam Muhammad Ali Jinnah that Pakistan without Kashmir would be incomplete. He made concerted efforts to get Kashmir liberated from India’s illegal occupation because his commitment with the people of Kashmir was indefatigable. Quaid’s vision on Kashmir is unequivocal. It was his foresight that he felt the importance and significance of Kashmir for Pakistanis as well as for Kashmiris. He vociferously condemned the Indian aggression on Kashmir by looking at the miserable conditions of Kashmiris even when there was no one else paying heed to their hues and cries.

Quaid-Azam Mohammad Ali Jinnah always wanted a peaceful settlement of the dispute but he was also determined to go to any extent to liberate Kashmir from Indian clutches, as his orders to the then Commander-in-Chief of Pakistan Army, General Douglas Gracey, to dispatch Pakistani troops to Srinagar and Jammu speak volume of his boldness on the Kashmir issue.

According to Quaid’s physician Dr. Riaz Ali Shah’s diary, Quaid-e-Azam during his illness in Ziarat said, “Kashmir is the Jugular vein of Pakistan and no nation or country would tolerate its Jugular vein remains under the sword of the enemy”. Not only the Jugular vein of Pakistan but also that of Kashmiri community in particular has been under the sword of the enemy for the last sixty eight years. Quaid-e-Azam’s interest in Kashmir is evident from the fact that he explained the significance of the name of Pakistan to Mountbatten on May 17, 1947 as “The derivation of the word Pakistan– P for Punjab; A for Afghan (i.e. Pathans of NWFP); K for Kashmir; I for nothing because that letter was not in the word in Urdu; S for Sindh and Tan for the last syllable of Baluchistan”. Quaid-e-Azam supported the Kashmir cause even before the independence of Pakistan. It was his desire that Kashmiris especially Muslims should get their socio-economic rights and justice. During the time of Dogra Raj in Kashmir, Muslims were managed in remorseless way and women were dealt like flock of sheep.

In 1926 when Quaid visited Kashmir he realized that Kashmiri Muslim sent a delegation to the then viceroy and presented an update to pay heed to the agonies of Kashmiris. That delegation when returned was tormented, their lands were grabbed.

When Quaid came back, a unanimous resolution was passed in the meeting of Muslim League at Lahore, which addressed maharaja to take care of the educational and economic rights of the Muslims. Allama Iqbal was also on the same footings as Quaid, taking notice of the maltreatment of Kashmiris.  In 1931 the president of Muslim League Allama Iqbal declared that 14 August should be observed as Kashmir Day by Muslims of Subcontinent.

Quaid’s three visits to Kashmir show that he had deep interest in Kashmir and its politics. Regarding Srinagar visit of the Quaid-e-Azam in 1944, Alastair Lamb said: “M.A. Jinnah, unlike Jawaharlal Nehru was extremely reluctant at this period of time to involve himself directly (or the Muslim League which he headed) in the internal affairs of the Princely State; such action would in his eyes have been constitutionally improper.” He always played by the book and never took a stand on any issue which he believed was not viable.

At the point when a leader after long encounters takes a decision, at that point such choices are ideologically solid. Quaid-e-Azam after significant stretch of time took firm choice on Kashmir. He took unflinching choice on the mission of Pakistan and afterward made an interpretation of it into activation and lastly accomplished his objective.

India by hook or by crook was eager to get hold of Jammu and Kashmir. ‘Two-Nation Theory’ is the basis of the Ideology of Pakistan but Indian Hindu leaders tried their best to negate it.  They attempted to impact Quaid-e-Azam with the goal that he may leave his stand on ‘Two-Nation Theory’ but he remained rock-solid on his position.

Therefore, in a bid of disapproving ‘Two-Nation Theory’ India illegally occupied the territory of Jammu and Kashmir by force as Jammu and Kashmir was Muslim majority state contiguous to Pakistan. People of Kashmir knew very well the importance of ‘Two-Nation Theory’ and are committed to it till date. The Quaid cautioned Sheikh Abdullah of Kashmir that he was playing in the hands of Congress and he would regret one day and the time proved Quaid’s words.  India kept tormenting Kashmiris and Sheikh Abdullah was also not remunerated for his services to India. Kashmiri leadership accepts the fact that Sheikh Abdullah’s lust for power exacerbated the Kashmir issue.

The situation in Kashmir post Article 370 abrogation in August 2019 proved every word of Quaid-e-Azam Mohammad Jinnah to be right.

The Quaid was man of principles. He succeeded in view of his responsibility and steadfast belief in mission of Pakistan and today we need same commitment and resolve. Deviation from Quaid’s vision will be extremely detrimental to stability of Pakistan.  If Kashmir was not made part of Pakistan then the country will have to face grave challenges in future.

Pakistan under the leadership of Prime Minister Imran Khan is steadfast on its just and long held stance that Kashmiris should be given their right to self-determination enshrined in multiple resolutions of the United Nations Security Council. Without resolving the outstanding issue of Kashmir, peace and prosperity in South Asia could not be achieved. It is now incumbent upon our policymakers to follow Quaid’s vision on Kashmir. In case of a dialogue with India, Pakistan should always give priority to the Kashmir issue. It is the responsibility of the political leadership to devise a concrete national policy of Kashmir issue which should always and consistently be followed by the government.  The current government should take firm stand and boldly express its principled stance on every forum as Quaid did in his life to defend Two Nation Theory and Kashmir issue.

By removing its special status, India has eroded all the state nomenclature of Jammu & Kashmir to bring it at par with other Indian states. India has been trying to settle Hindu migrants in Indian illegally occupied Jammu and Kashmir to change its demography and has so far issued around 3.4 million domiciles to non-Kashmiris particularly Hindus to dilute the Muslim majority status. Therefore, Pakistan should raise voice against this blatant violation of Justice and fair play. It was very unfortunate that Quaid-i-Azam died a year after Pakistan came into being. Had he lived for a few more years, Kashmir would have been part of Pakistan. This Kashmir Solidarity Day on February 5, let’s follow the footsteps of the Quaid and wage a political and diplomatic war against the illegal Indian annexation of Jammu and Kashmir. In order to attain this, let’s shed-away the petty personal interests and bring national consensus to strengthen Pakistan. A politically united, socially harmonious and economically prosperous Pakistan will pave the way for freedom of Kashmir from the illegal Indian subjugation; the fulfillment of Quaid’s commitment with Kashmiris.