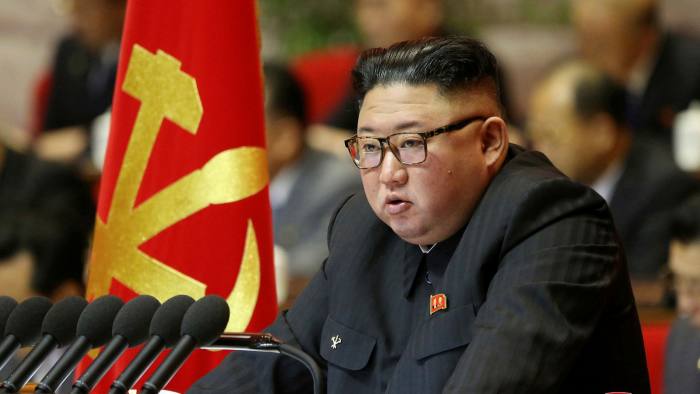 Mr Moon, who has staked his presidential legacy on building lasting peace and ultimately achieving unification of the Korean peninsula, has again extended an olive branch to the 37-year-old dictator, saying South Korea would meet North Korea “anytime, anywhere”.

“The key driving force of the peace process on the Korean peninsula is dialogue and win-win co-operation,” the president said in a televised New Year address on Monday.

His price for the US is ending combined military drills with Seoul, removing sanctions, and refraining from making human rights criticisms and name-calling before talks

Mr Moon’s overture was delivered two days after Pyongyang signalled plans to develop a series of new weapons — including shorter-range tactical missiles — and Mr Kim described the US as his country’s “biggest enemy”.

The North Korean military held a parade in Pyongyang’s Kim Il Sung square on Sunday night, according to South Korea Joint Chiefs of Staff, in another show of strength by the Kim regime after it unveiled the world’s largest intercontinental ballistic missile in October.

Despite those actions, Duyeon Kim, a North Korea expert at the Center for a New American Security, a US think-tank, said the North Korean leader had not closed the door on diplomacy. But the dictator had set the “price very high” for any talks with either Seoul or Washington, she said.

“His price for the US is ending combined military drills with Seoul, removing sanctions, and refraining from making human rights criticisms and name-calling before talks,” Ms Kim said.

She added: “His price for talks with Seoul are also very high, demanding the South acquiesce, refrain from buying weapons, offer much bigger concessions than humanitarian aid, and return to its pan-Korean roots by breaking from the US.”

South Korea’s latest attempts at rapprochement came amid questions over how the Biden administration would tackle North Korea, one of many thorny foreign policy challenges at a time of unprecedented domestic upheaval in the US.

Nuclear talks have been mostly stalled for the past two years despite three face-to-face meetings between President Donald Trump and Mr Kim.

Mr Biden has previously signalled he would not follow Mr Trump’s unconventional, theatrical summitry with Mr Kim after it failed to result in a robust denuclearisation plan.

But there are concerns that similar approaches have also struggled to slow North Korea’s nuclear weapons development.

‘We Are One’: Why Punjab’s landless Dalits are standing with...