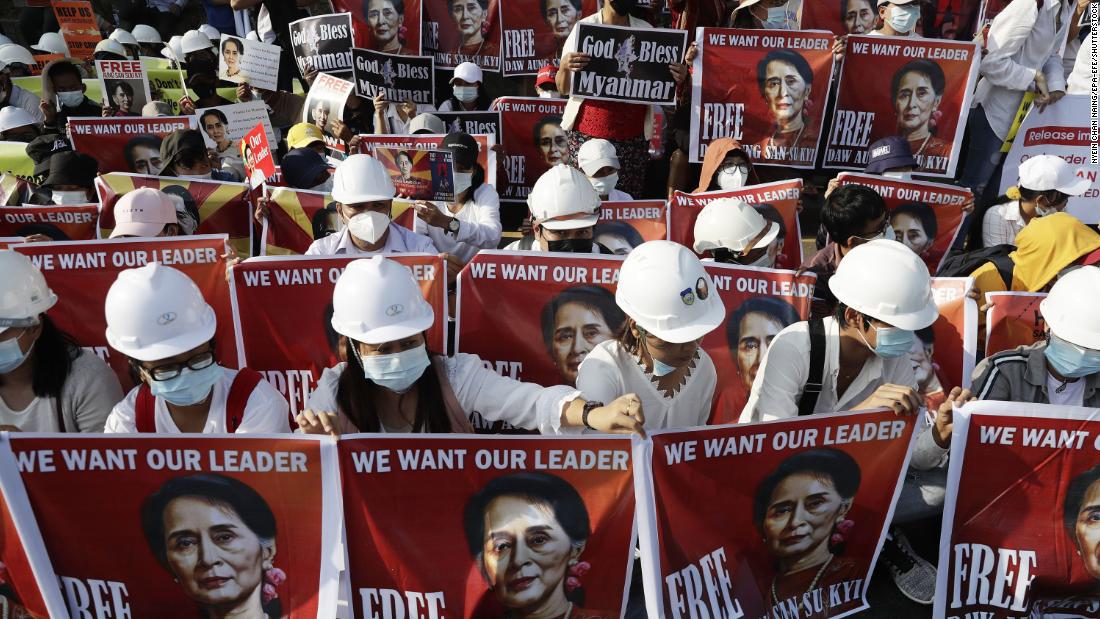 Yangon: Concerns are growing over the potential for violence in Myanmar as anti-coup protesters urge supporters to take to the streets en masse, in defiance of the military generals who have deployed troops in major cities.

Protests and civil disobedience movements against the military coup on February 1 have been the biggest in decades, with thousands calling for ousted civilian leader Aung San Suu Kyi to be released from detention and power be handed back to civilian control.

Thousands more marched to Sule Pagoda in downtown Yangon Wednesday, after a second charge was filed against Suu Kyi Tuesday. Her lawyer Khin Maung Zaw said that she had been charged in relation to a national disaster law, in addition to an earlier count under the country’s import and export act.

“Let’s gather in millions to take down the dictators,” activist Khin Sandar wrote on Facebook, according to Reuters.

Kyi Toe, a senior member of Suu Kyi’s National League for Democracy (NLD) party who has not been arrested, said: “Let’s march en masse. Let’s show our force against the coup government that has destroyed the future of youth, the future of our country.”

Images showed peaceful protesters marching and carrying banners reading “Release our leader” and “Join CDM” the civil disobedience movement. Others blocked roads and bridges with cars, leaving their engine hoods up as if they had broken down.

The crowd in Yangon was joined by young people, striking factory workers, teachers wearing red ribbons on their shirts, monks and members of the LGBTQ community waving rainbow flags. Large posters were unfurled over walkways with some depicting the three-fingered salute from the “Hunger Games” franchise that has become a popular symbol of protest in Myanmar and neighbouring Thailand.

The United Nations special rapporteur on human rights in Myanmar, Tom Andrews, said he was “terrified” of the potential for violence if the planned mass protests and military troops converge.

“I fear that Wednesday has the potential for violence on a greater scale in Myanmar than we have seen since the illegal takeover of the government on February 1,” said Andrews.

Andrews said he had received reports of soldiers being transported into Yangon from outlying regions.

“In the past, such troop movements preceded killings, disappearances, and detentions on a mass scale,” he said. “We could be on the precipice of the military committing even greater crimes against the people of Myanmar.”

Soldiers from the Myanmar military’s light infantry divisions (LIDs) — long documented to be engaged in human rights abuses — have been seen in the country’s largest city, Yangon, in the past week.

These elite counter-insurgency forces come under direct orders from Myanmar military’s commander-in-chief, Min Aung Hlaing, and they have been accused of human rights violations, carrying out violent campaigns against ethnic minority armed groups and civilians, and have a history of brutally crushing protests.

Conflict-ready infantry troops trained to fight ethnic rebels in the jungles and mountains and who now appear armed on city streets is cause for worry, analysts say.

“These light infantry divisions, these are the ones to be concerned about,” said Human Rights Watch researcher on crisis and conflict Richard Weir. “These are the kinds of units that can be deployed very quickly to city streets.” CNN

Another Indian conspiracy against Pakistan exposed