The impact of climate change on peace and security in Somalia 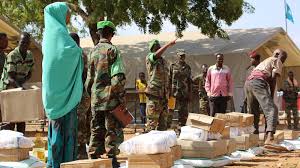 A new collaborative NUPI-SIPRI project examines how climate change affect peace and security in states and regions on the UN Security Council’s agenda. On 4 February, the project launched its first fact sheet, looking into Somalia.

The Climate-related Peace and Security Risks project launches its first fact sheet on Somalia ahead of the United Nations Security Council (UNSC) meeting on the renewal of the mandate for the African Union Mission in Somalia (AMISOM) scheduled for the end of February.

The project is jointly undertaken by the Norwegian Institute of International Affairs (NUPI) and Stockholm International Peace Research Institute (SIPRI) with funding from the Norwegian Ministry of Foreign Affairs and aims to generate reliable, relevant, timely and actionable information and analysis on climate-related peace and security risks for selected countries and regions on the UN Security Council agenda.

The two institutes complement each other well as NUPI has a long record of research on UN peace operations and the Security Council, while SIPRI has done extensive research on the effects of climate change – with dedicated researchers such as Dr. Malin Mobjörk and Dr. Florian Krampe.

The project’s main product is a series of fact sheets on countries on the agenda of the Security Council.

How does climate change affect peace and security in Somalia?

Somalia is highly susceptible to the effects of climate change and extreme weather. Without anticipatory preventive approaches, these factors are likely to exacerbate existing vulnerabilities and reduce the people’s livelihood options, which in turn may have negative impacts for stability and security in Somalia.

This has complex and interlinked implications for the peace and security situation in Somalia, including:

Climate-related displacement and migration are likely to increase, particularly for those whose livelihoods are influenced by droughts and floods; that can fuel tensions at the community and national levels and disrupt ongoing conflict resolution initiatives.

Armed groups like Al Shabaab can take advantage of climate impacts by positioning themselves as service and relief providers following droughts and floods.

Droughts and floods can link local resource conflicts to broader insecurity, as elites may exploit the impacts to advance their influence over communities and resources.

The climate related peace and security risks project´s next fact sheet will be on South Sudan and it will be published in the end of February. Reliefweb

UN chief and peace activist honored with Zayed Award for...