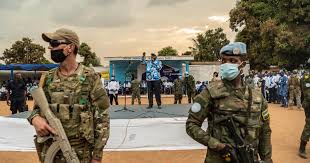 Dekoa: Unidentified “armed combatants” have killed three peacekeepers from Burundi in the Central African Republic (CAR), the United Nations said hours after a rebel coalition fighting the government called off a unilateral truce and reiterated calls for the suspension of a general election scheduled to take place on Sunday.

The attacks on UN peacekeepers and CAR troops took place in Dekoa, central Kemo prefecture, and in Bakouma, southern Mbomou prefecture, the UN said in a brief statement.

The attacks came as voters in CAR geared up for presidential and legislative elections, deemed a key test for the country’s ability to recover stability after decades of political turmoil and armed conflict.

President Faustin-Archange Touadera, seeking another mandate, is the favourite to win the presidential election in a field of 17 candidates.

The country’s constitutional court ruled on Saturday the presidential elections will proceed as planned on Sunday, after several opposition groups as well as a recently formed coalition of armed groups – the Coalition of Patriots for Change (CPC) – called for a vote delay.

The court has rejected several candidacies for the election, including former President Francois Bozize, who was removed in 2013 following a rebellion led by the Seleka fighters.

Speaking from the capital Bangui, Al Jazeera’s Catherine Soi said the atmosphere is one heavy with tension.

“The court said the petitioners did not have strong enough grounds to have the election postponed,” she said.

“We have spoken to UN officials who say 70 percent of the country is safe enough for people to come out to vote. We have spoken to the government’s spokesman who said that yes, they expect a low voter turnout but they hope that this turnout won’t be so slow as to discredit process.”

The CPC, formed on December 19 and drawing from militia groups that together control two-thirds of the country, launched an offensive last week and threatened to march on the capital, Bangui.

The government called the move a “coup”, accusing Bozize of stoking the CPC rebellion to disrupt the election.

The former president, who is under UN sanctions, denied the claim.

The rebel alliance’s progress was halted with international help: Russia and Rwanda sent troops to shore up Touadera’s government, while UN mission in South Sudan also sent 300 peacekeepers to CAR on Thursday to help the country “secure the elections”.

The CPC announced a brief unilateral truce on Wednesday, but called it off on Friday, saying the government had “cavalierly rejected” this “chance for peace”.

Hours later, the UN’s MINUSCA peacekeeping force said fighting resumed in Bakouma, about 250km (155 miles) east of Bangui. Gunmen had sought to advance down the main highways towards Bangui but were stopped, according to MINUSCA, which has more than 12,500 uniformed troops in the country.

Touadera, who has been campaigning in Bangui flanked by Russian, Rwandan and UN guards, has urged voters to come out and vote without fear on Sunday. Al Jazeera

U.S. response to Putin may close door to more arms...