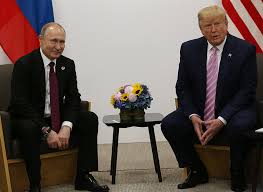 Washington/Moscow: The United States, responding to Russia blaming Washington for starting a new arms race, reiterated a proposal already rejected by Moscow for extending their last strategic arms limitation treaty, appearing to close the door to talks in the final weeks of the Trump administration.

The 2010 New START (Strategic Arms Reduction Treaty) expires on Feb. 5 unless the presidents of the world’s two biggest nuclear arms powers agree to extend it by up to five years. The deadline puts pressure on U.S. President-elect Joe Biden to act quickly after taking office on Jan. 20.

The treaty’s lapse would end all restraints on deployments of U.S. and Russian strategic nuclear warheads and the missiles, bombers and submarines that carry them, fueling a new nuclear arms race, policy experts said.

Russian President Vladimir Putin on Thursday tweeted that “We are ready to continue the dialogue with the US, but for that our partners need to respond.” Putin, at his annual news conference on Thursday, blamed Washington for starting a new arms race, saying Moscow was forced to develop hypersonic weapons in response.

The Russian Foreign Ministry “rejected all mtgs,” Billingslea said on Twitter. “All we need to do is define what we are freezing, the cap level & start verification talks.”

Russia had proposed a one-year New START extension and a strategic and tactical warhead freeze of the same duration, but only if Washington sought no further conditions.

Talks have been stalled since October. Russia in November revived an earlier call for an unconditional New START extension for the five-year maximum.

Daryl Kimball, head of the Arms Control Association, a Washington advocacy group, said Billingslea’s response made it all but certain there would be no further talks until Biden succeeds Trump.

Biden favors extending New START as a “foundation for new arms control arrangements.” Sources close to his transition team said last month that Biden has made no decision on a duration.