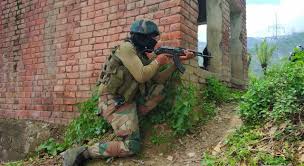 According to the details, the troops martyred the youth during a cordon and search operation in Kanigam area of the district. Earlier, two Indian troops were injured in an attack in the same area. The operation continued till the last reports came in. Senior Hurriyat leader, Ghulam Muhammad Khan Sopori, in a statement issued in Srinagar paid glowing tributes to the martyred youth.

Meanwhile, the Hurriyat forum led by Mirwaiz Umar Farooq in a statement said that Indian troops were committing the worst kind of human rights violations in the occupied territory to suppress the Kashmiris’ freedom struggle. It condemned the coercive and arbitrary arrests and detention of Hurriyat leaders, activists and youth by Indian police across the Kashmir Valley.

Political experts and analysts in IIOJK in their interviews in Srinagar maintained that the Sikhs in Punjab and the Kashmiris both are fighting against the Indian hegemony and the day is not far off when they will get freedom from Indian slavery. They said the Sikhs have not forgotten the massacre by Indian troops in the wake of assassination of Indira Gandhi by her Sikh Bodyguards in November 1984. They maintained that 17,000 Sikhs were mercilessly killed in the genocide. During the pogrom, Indian troops resorted to mass murder, mass sexual assaults, arson, looting and acid attacks against the Sikh community all across India.

On the other hand, the occupation authorities through an order once again extended the ban on high speed internet service till 8th January 2021. The 4G internet service remains suspended in IIOJK since 5th August, 2019 when Narendra Modi-led fascist Indian government repealed the special status of the territory and placed it under strict military siege.