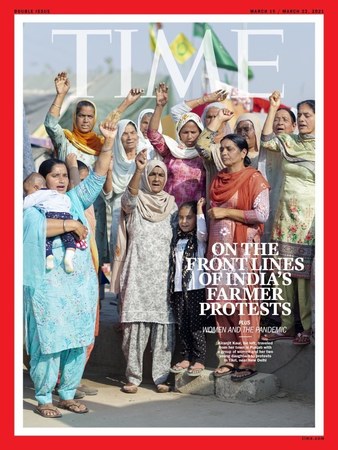 New Delhi: Hundreds of thousands of farmers have been protesting outside New Delhi since November in the hopes of forcing the government to repeal three agricultural laws. The protests have been met with violence by the police and online attacks by BJP supporters.

Those who support the farmers aren’t safe either, as international celebrities such as Rihanna and Greta Thunberg have been threatened for tweeting in their support. Their tweets were met with protests, burnt effigies and a string of condemnation from Indian celebrities, such as Kangana Ranaut.

But despite all the opposition they’re facing, the farmers aren’t going anywhere. In fact, TIME spoke to a 74-year-old woman at the protest who said “something snapped with us” when they heard that the government was asking women and the elderly to go back home.

“Why should we go back? This is not just the men’s protest. We toil in the fields alongside the men. Who are we—if not farmers?” said Jasbir Kaur. These sentiments were echoed by the thousands of other women at the protests.

The article describes the experiences of the different women at the protests and how they are defying even their own expectations to fight for their rights.

“I didn’t know what I was capable of beyond the expectations of me as a woman, a wife and mother,” one woman tells TIME who had never before been to a protest or taken her veil off outside her home. “But I am here now and I cannot be oppressed. I cannot be intimidated. I cannot be bought.” People were happy for the representation and TIME’s highlighting the strong women at the protests.  DAWN