Subscribe Us
HomeInformationTo suppress the freedom movement India uses violence as a weapon of war against Kashmiri women
Information, NGO 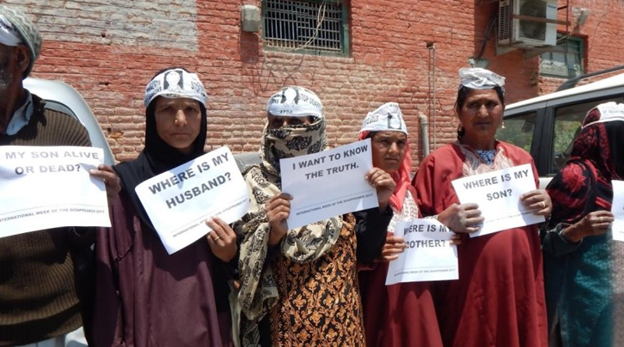 Islamabad: Speakers at a seminar held under the aegis of the Kashmir Institute of International Relations (KIIR) on Wednesday urged the global community to stop the use of sexual violence against women in Indian occupied Jammu & Kashmir being leveraged as a weapon of war by the Indian occupation forces to suppress Kashmiris’ legitimate struggle for the right to self-determination.

In his opening statement, the KIIR chairman while highlighting the plight of Kashmiri women said, “Sexual violence being leveraged as a weapon of war by the Indian forces in the region has been grossly overlooked at the international level”. Despite growing awareness of the urgent need to empower women in the conflict-hit areas, he said that prolonged Indian military occupation and massive troop buildup in the region had created a fertile ground for violence against the women.

“Being a vulnerable part of the society, the Kashmiri women have been the worst victims of this long-drawn unresolved dispute that has left behind a harrowing legacy in the person of rape-victims, widows and half widows”, Wani said adding that the continued conflict, bloodshed and violence have shattered the lives of women so much and so that today thirty-six percent of women in the troubled region suffer anxiety disorder. “Rape, the outrage of modesty and other forms of violence by the occupation forces have inexpressibly shattered the lives of Kashmiri women living under a constant threat of assault from the Indian army”, he added.

Speakers on the occasion paid rich tributes to Kashmiri women for their resilience, courage and determination in the face of Indian brutality and state-repression. Expressing deepest concern over an alarming increase in levels of mental health disorders in the population of In Indian occupied Jammu & Kashmir they said, “The massive troops’ concentration and fast-spreading structures of violence continue to foster an environment of violence against women who have been caught in a whirlwind of violence and uncertainty”.

Voicing their concern over the absence of an independent and credible accountability frame-work in the region they said, “Owing to the lack of accountability the hapless women continue to be the primary victims of large-scale systematic sexual violence being unabashedly used by India as a war-tactic”.
The participants of the seminar expressed their complete solidarity with women and girl victims of Indian state-terrorism and half-widows whose husbands have been subjected to forced disappearances by the Indian army.

Recalling the international covenants the speakers demanded the international community to hold the Indian army accountable for the war crimes they had committed against women in Kashmiris. They stressed the need for empowering Kashmiri women who continue to be the primary victims of large-scale systematic sexual violence being unabashedly used by India as a war-tactic.

Denouncing in strong terms the abrogation of article 370 and 35- A by the Modi led Indian fascist regime the speakers termed it as a flagrant violation of the UN resolutions that strongly prohibit the occupying state (India) from bringing any change in the status of the disputed territory unilaterally. About the induction of a series of new laws in the region, the speakers said that these anti-Kashmiri laws were meant to change the demographic complexion of the occupied Jammu and Kashmir. They also deplored the recent raid by NIA officials at the Jammu and Kashmir Coalition of Civil Society (JKCCS) office, the residence of veteran rights activists Khrum Parvez, APDP chairperson Parveena Ahanger, Great Kashmir and Kashmir Times office and ceasing of bank accounts and offices of Amnesty International. The seminar while flaying the continued detention of Hurriyat leaders said that the Indian government was hell-bent on choking every voice of dissent in the region.

The seminar appreciated the International human rights organizations, members of Indian civil society and international media for documenting HR violations in the region and raising the alarm on the growing humanitarian crisis in the Indian occupied Kashmir.

Stressing the need for an early and amicable solution to the Kashmir dispute they said, “A just settlement of the Kashmir dispute in accordance with relevant Security Council resolutions is imperative for a lasting peace and stability in the South Asian region”. Kashmiris’ legitimate and indigenous political struggle for the right to self-determination they said could not be suppressed in the guise of the so-called terrorism mantra being paddled by India. KW

Is plebiscite in Kashmir workable?