Subscribe Us
HomeLatest NewsTurning back from Afghan peace process would be a tragedy: Munir Akram
Latest News

Turning back from Afghan peace process would be a tragedy: Munir Akram 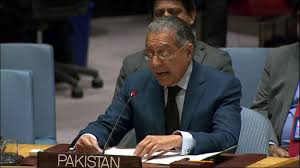 New York: Pakistan told a United Nations briefing on Afghanistan that turning back from the ongoing Afghan peace process would be a tragedy, especially after making “substantial progress” towards a political solution to the country’s conflict, even though difficulties remain.

“It would be a tragedy if because of these difficulties we were to turn back on the peace process and revert to a military strategy,” Ambassador Munir Akram said after senior United Nations (UN) officials briefed member states on the 2021 humanitarian response plan for Afghanistan.

“A political solution is the only path to peace in Afghanistan,” the Pakistani envoy told the session organized by the U.N. Office for the Coordination of Humanitarian Affairs (OCHA).

“My Prime Minister (Imran Khan) has consistently maintained that the Afghan conflict can be ended, not by military force, but through a political settlement involving the full spectrum of Afghanistan’s political landscape,” Ambassador Akram told the session.

He said, shared international community’s determination not to allow Afghanistan’s territory to be used by Al Qaeda, ISIS, and other international terrorist groups, to threaten or attack any country.

The Pakistani envoy called on all parties to the Afghan conflict to take “urgent steps” to reduce the level of violence leading to cessation of hostilities.

“The ongoing intra-Afghan negotiations have rekindled hope for peace through a comprehensive political settlement,” he said, urging the Afghan parties to seize this historic opportunity.

“It is the Afghans who must be the masters of their destiny and decide their own future without outside influence or interference.”

Afghanistan needs peace, an end to foreign intervention and terrorism as these factors had left a devastating impact on the humanitarian situation in the country, the Pakistani envoy said.

He said, has committed a billion dollars to Afghanistan’s development, out of which US $ 500 million have already been spent on infrastructure and capacity-building projects. APP

3 reasons why supporting peace is more important than ever