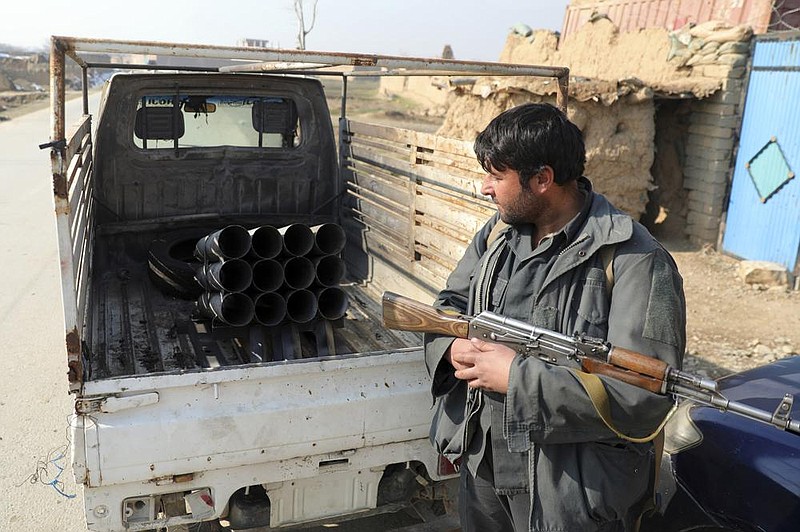 The U.S. military met its goal of reducing the number of troops in Afghanistan to about 2,500, a drawdown that may have violated a last-minute congressional prohibition.

The reduction could complicate matters for the incoming Biden administration, which must determine how to handle a Trump administration commitment to the Taliban to remove all U.S. military, intelligence and contractor personnel from Afghanistan by May as a move to spur peace negotiations. Those talks are at an early stage.

Senior U.S. commanders are skeptical of the Taliban’s stated commitment to peace, although they have said they can accomplish their mission in Afghanistan with 2,500 troops.

“This drawdown brings U.S. forces in the country to their lowest levels since 2001,” said acting Defense Secretary Christopher Miller in the statement. Miller also said “the United States is closer than ever to ending nearly two decades of war and welcoming in an Afghan-owned, Afghan-led peace process to achieve a political settlement and a permanent and comprehensive ceasefire.”

President Donald Trump, who ordered the reduction in November, when there were about 4,000 U.S. troops in Afghanistan, said Thursday that troop levels had reached a 19-year low, although he did not specify a number.

Last February his administration struck a deal with the Taliban to reduce American troop levels in phases and to go to zero by May 2021. It is unclear how the Biden administration will proceed.

President-elect Joe Biden, who has advocated keeping a small counterterrorism force in Afghanistan as a way to ensure that extremist groups like al-Qaida are unable to launch attacks on the United States, faces a number of questions on Afghanistan. One is how and whether to proceed with fledgling peace talks between the Taliban and the Afghan government.

Trump in his brief statement alluded to his long-standing desire to get out of Afghanistan entirely.

“I will always be committed to stopping the endless wars,” he said, referring to U.S. wars that have dragged on in Afghanistan since 2001 and in Iraq for much of the period since 2003.

Although senior military officials had cautioned against speedy troop reductions in Afghanistan, Miller announced Nov. 17 that he was implementing Trump’s order. As a result, military commanders scrambled to pull more than 1,500 troops out of the country in the past few weeks. At Trump’s order, commanders also cut U.S. troop levels in Iraq to 2,500 from about 3,000 in the same period. Miller confirmed Friday that the Iraq drawdown had been completed.

The Afghanistan decision was seen by some as unnecessarily complicating the decision-making of the incoming administration. Trump at the time had refused to acknowledge that he had lost the election and would be ceding to Biden on Jan. 20. Some in Congress, including fellow Republicans, opposed Trump’s decision.

Under the National Defense Authorization Act passed by Congress two weeks ago, the Pentagon was explicitly forbidden to use money from this year’s or last year’s budget on reducing the number of troops below 4,000 — or below the number that was in the country the day the bill was finalized, which was Jan. 1. Trump vetoed the measure, but both the House and Senate voted to override his veto.

The defense legislation provided two conditions under which the Pentagon could get around the prohibition — a presidential waiver or a report to Congress assessing the effect of a further drawdown on the U.S. counterterrorism mission in Afghanistan and the risk to U.S. troops there. As of Thursday, the Pentagon had met neither of those conditions.

“The President has determined that waiving the limitations of this section with respect to a reduction in the total number of U.S. armed forces deployed to Afghanistan is important to the national security interests of the United States,” Army Maj. Rob Lodewick said in a statement Friday.

Trump signed the waiver Thursday night, but congressional leadership is not expected to receive it until next week, according to a Defense official and a congressional aide who both spoke on condition of anonymity because they were not authorized to discuss procedural specifics with the media.

Miller said Friday that the Pentagon is planning for troop reductions to zero by May, adding that “any such future drawdowns remain conditions based.”

The legislative prohibition on completing the drawdown put the Pentagon in a bind, coming weeks after it had begun the drawdown.

“Convention dictates that reducing troop levels, associated equipment and adjusting associated force protection requirements across a country-wide combat zone is not something that can be paused overnight without increasing risk to the force and core mission goals,” Lodewick said.

The main reason for concern about a too-quick troop withdrawal is what the Pentagon sees as continued high levels of Taliban violence against the Afghan government. Some U.S. officials have questioned the wisdom of fully withdrawing, in accordance with the February 2020 agreement with the Taliban, if violence remains high.

The U.S. invasion of Afghanistan in October 2001 was aimed at overthrowing the Taliban regime, running al-Qaida out of the country and laying the groundwork for a global “war on terrorism.” It turned into something more ambitious but less well-defined and became far more costly in blood and treasure.

During Biden’s time as vice president, the U.S. pushed troop totals in Afghanistan to 100,000 in a failed bid to compel the Taliban to go to the negotiating table. When Trump took office four years ago there were about 8,500 troops in the country, and he raised it to about 13,000 that summer.

Afghan and United Nations officials have reported that the Taliban maintain ties to al-Qaida. The special U.S. envoy for Afghanistan, Zalmay Khalilzad, said the Taliban still have “work to do before they satisfy their commitments.” The Washington Post.

US President Donald Trump signs the Malala Yousafzai Scholarship into...