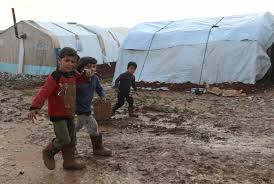 New York: Geir Pedersen, the UN’s special envoy for Syria, called for “more serious and cooperative” international diplomacy as part of political efforts to improve the lives of the Syrian people and develop a vision for the future of their country.

Speaking ahead of the fifth session of the Small Body of the Syrian Constitutional Committee, which begins on Monday in Geneva, he also urged committee members to focus their efforts and work more effectively to speed up progress on constitutional reform.

“After all, despite the differences, key states are continuing to reaffirm their commitment to Resolution 2254,” he added, referring to the UN Security Council resolution, adopted in 2015, that calls for a ceasefire and political settlement in Syria.

Pedersen, who briefed the Security Council this week on the latest developments, highlighted the fact that five foreign armies are active in Syria and “violations of Syrian sovereignty and territorial integrity (have been) going on for years.”

Although the ceasefire agreement reached by Russia and Turkey in the northwest of the country resulted in a de-escalation of hostilities, Pedersen warned that this relative calm remains fragile.

“All of these issues cannot be sorted out by the Syrians alone,” he said. (They) need an international cooperation (and) a real exchange of views (among all parties).

“If that political will is lacking it would be very, very difficult to move this process forward … if you leave this to the UN alone, we will not be able to succeed.”

Top on the agenda on Monday will be discussion of the basic principles of the Syrian constitution. Pedersen said he has been meeting with the two co-chairs of the committee on a regular basis, and has also had intensive discussions with the “Middle Third” civil-society group, which includes society activists and experts and other independents from inside and outside of Syria.

His experiences during the past year, he said, lead him to believe there is potential for finding common ground. No single actor or group of actors can impose its will on Syria or settle the conflict alone — they must work together, he added.

The time has now come for the co-chairs of the Constitutional Committee to organize and focus its efforts by establishing “more effective and operational working methods,” Pedersen said, so that they can begin to move forward from preparing constitutional reforms to actually drafting them, and agreeing on clear agendas and discussion topics for future meetings.

“There needs to be more urgency (in) delivering progress in this process,” he added.

As he saluted the work of civil society groups and “all the Syrians who do what they can to improve the situation on the ground and support a political process,” Pedersen singled out women in particular for praise. He has been particularly proactive in seeking input from the Women’s Advisory Board.

“It is a priority for all of us to make sure that we have full participation of Syrian women in the political process,” he said. “(Promoting) their core constitutional rights is central for me, as the facilitator of the work of the Constitutional Committee.”

Asked about plans for large-scale prisoner swaps, Pedersen said that although this is not on the agenda for the talks in Geneva this week, it is always part of his own agenda. The disappointment over the lack of progress on the issue so far means “that we should work even harder” on it, he added.

“This is a file that really has an impact on nearly every Syrian family, and it needs to be addressed,” he said. “(I) have appealed (for) more information on the missing. (We) need to see the early release of women, children, the elderly and the sick, and I think (nothing) should stop that from happening.”

The members of the Small Body of the Syrian Constitutional Committee are due to arrive in Geneva on Saturday, and Pedersen will consult with the co-chairs over the weekend before the main talks begin on Monday.

“My hope has been that the Constitutional Committee, if it is handled in the correct manner, could start to build trust and (be) a door-opener for a broader political process.

“But the (committee) cannot work in isolation … we need political will from the different parties to be able to move forward.”

He added: “The (committee) is just one aspect, and it is not the one aspect that will solve the Syrian crisis. If we are to see changes in the situation on the ground, there are other factors that need to be discussed.” Arab News