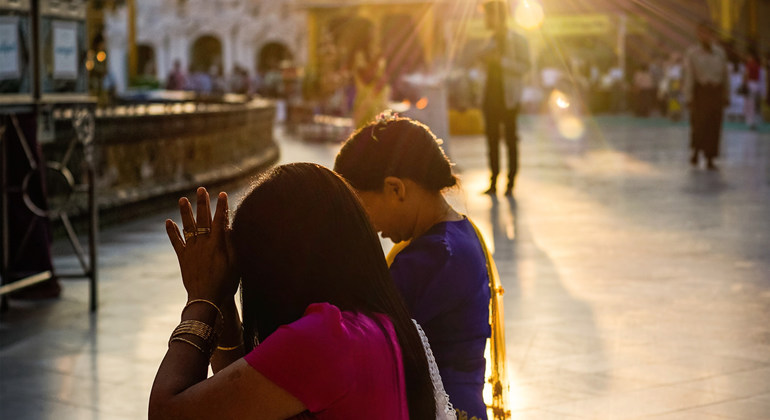 New York: The UN Special Envoy for Myanmar continues her work towards engaging with officials in the country nearly two months after the military coup, the global Organization said on Saturday.

Christine Schraner Burgener is seeking to visit Myanmar as part of her efforts to calm the situation and set the stage for dialogue and a return to democracy, said UN Spokesman Stéphane Dujarric, briefing journalists in New York.

Visit not yet possible

“A visit to the country under the current circumstances is not yet possible, as highlighted during the Special Envoy’s consultations with various key stakeholders, but she is continuing to evaluate openings”, he said.

“Meanwhile, the Special Envoy will aim to engage Myanmar’s neighbouring countries through a regional visit.”

The United Nations has condemned the 1 February coup in Myanmar and the subsequent violent crackdown on pro-democracy demonstrations across the country.

Earlier this week, UN Secretary-General António Guterres said he was “appalled” by the reported killing of dozens of protesters this past weekend.

Several experts appointed by the UN Human Rights Council have also raised alarm over forced evictions, arbitrary detention and the killings of protestors in Myanmar.

They recommend that States should consider applying the principle of universal jurisdiction to prosecute those responsible, according to a statement.

The experts said security forces have killed at least 121 people since Friday, while more than 2,400 people have been detained since the coup began.  The whereabouts of hundreds more are unknown.

The experts have also received reports about forced evictions in several parts of the country, including a police and military raid last week on a compound in the country’s largest city, Yangon, housing nearly 1,000 employees of Myanmar Railways and their families.

Many of the residents were forcibly evicted at gunpoint as punishment for participating in a nationwide general strike.

“Forced evictions constitute a gross violation of the right to adequate housing and several other human rights. These actions must stop immediately”, the experts said. “Those affected must be allowed to return to their homes and property, and those responsible brought to justice.”

The eight experts who issued the statement monitor human rights situations in specific countries, or on thematic issues, such as the right to adequate housing.

They act in their individual capacity and are neither UN staff, nor are they paid by the Organization.